WASHINGTON (CNN) -- The Bureau of Alcohol, Tobacco, Firearms and Explosives said Wednesday it is changing its ways after an audit showed that the agency was losing guns and laptops, often through carelessness. 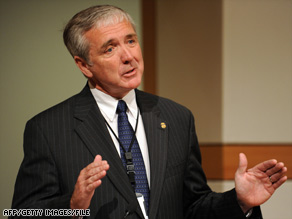 ATF Director Michael Sullivan says the agency is revising its procedures on lost weapons and laptops.

According to a Justice Department audit released Wednesday, the inspector general reported the ATF was unable to account for 76 weapons and 418 laptops over the past five years.

The report said the rate of loss had tripled since the last audit was conducted by the ATF's then-parent agency, the Treasury Department.

"It is especially troubling that ATF's rate of loss for weapons was nearly double that of the FBI and DEA," the report said.

ATF Director Michael Sullivan said he agreed with most of the report's findings.

"We are revising our procedures of reporting losses of weapons or laptops," Sullivan said.

Of the 76 missing weapons, 35 were stolen from agents' homes, hotel rooms or vehicles, the report said. Some of the others were left in public places or lost in shipping -- or their losses were still unexplained.

Two of the stolen guns were used to commit crimes, the report said. One was used to shoot through the window of a residence, and the other was recovered from suspects arrested on burglary charges.

The inspector general determined that 53 percent of the weapon losses were the result of employees' carelessness or failure to follow ATF policies.

The report said that in most cases, it was not clear whether the missing laptops contained sensitive or classified information. Seven did; 13 did not.

"ATF could not provide adequate information" about the contents of the other 398, the report said, and therefore, "ATF could not assess what damage these losses could have had on ATF's operations or national security."

Few, if any, of the missing laptops had the data encrypted, according to the report.

All About Bureau of Alcohol, Tobacco, Firearms and Explosives • U.S. Department of Justice