WASHINGTON (CNN) -- With moments of silence punctuated by somber music, readings of names, and tears, Americans held solemn memorial services Thursday to honor the victims of the September 11, 2001, terrorist attacks. 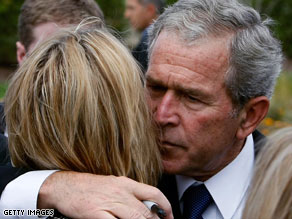 President Bush comforts a mourner Thursday at the dedication of the Pentagon's 9/11 memorial.

Former Defense Secretary Donald Rumsfeld returned to the Pentagon to help dedicate a memorial to victims of the attack there.

"Today we renew our vows to never forget how this long struggle began and to never forget those who fell first," said Rumsfeld, who despite his high office helped carry the wounded from the burning building seven years ago.

"We will never forget the way this huge building shook. We will not forget our colleagues and friends who were taken from us and their families.

"And we will not forget what that deadly attack has meant for our nation."

Rumsfeld donated hundreds of thousands of dollars of his own money to help build the Pentagon memorial.

After the ceremony, participants moved through the memorial, finding and touching the benches honoring loved ones, colleagues and fellow citizens.

CNN has continuing coverage of events marking the anniversary of the September 11 terrorist attacks.
All day Thursday

Seven years ago, al Qaeda terrorists used hijacked airplanes to attack the World Trade Center and the Pentagon -- the twin symbols of America's financial and military might. Another hijacked plane crashed in Pennsylvania. iReport.com: 'I just sat in my car and cried'

At the Pentagon, the ceremony dedicated a memorial to the 184 victims killed when American Airlines Flight 77 struck the building's west wall.

An American flag was raised smartly to the top of a flagpole, then slowly lowered to half-staff, and a band played the national anthem.

Watch and listen to Thursday's ceremonies »

At the White House, President Bush and first lady Laura Bush, along with Vice President Dick Cheney and his wife, Lynne, observed a moment of silence on the South Lawn at 8:46 a.m., the moment when American Airlines Flight 11 struck the north tower of the World Trade Center.

Watch an audio slide show about that day »

"We come each year to stand alongside those who loved and lost the most, to bear witness to the day which began like any other and ended as none ever has," Bloomberg said.

Flanked by police officers, firefighters and other officials, Bloomberg quoted what he called an Irish proverb: "Death leaves a heartache no one can heal. Love leaves a memory no one can steal."

Relatives then began to read the names of the 2,751 victims at the crash site, commonly called ground zero.

The New York Stock Exchange observed a moment of silence before its opening bell sounded.

In Shanksville, Pennsylvania, Sen. John McCain, the Republican presidential nominee, spoke for less than two minutes at a ceremony to remember the 40 passengers and crew of United Airlines Flight 93, who perished after the hijacked plane went down in a field there.

It is believed that the passengers and crew, aware of the fate of at least some of the other hijacked planes, fought back against the men who had taken control of their aircraft, leading to its crash.

The services were held at a temporary memorial near the western Pennsylvania crash site.

McCain and his Democratic counterpart, Sen. Barack Obama, agreed to suspend campaigning for the day. Both candidates were to take part in a wreath-laying ceremony at the World Trade Center site at 3:30 p.m.

All About September 11 Attacks • World Trade Center • The Pentagon