(CNN) -- New York's famous skyline may be getting a new addition: Wind turbines. 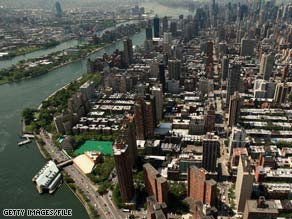 During a Tuesday night speech at an energy conference in Las Vegas, Nevada, Bloomberg vowed to "kick alternative energy production into high gear in the Big Apple."

Bloomberg said the city is already asking companies with strong track records in producing renewable energy for "their best ideas for creating both small- and large-scale projects serving New Yorkers."

He was not specific about which of the city's skyscrapers or bridges would be candidates for turbines, but aides said some companies are experimenting with smaller turbine models that could be made to appear part of the design, reducing potential changes to the city's famous skyline.

For offshore locations, city aides told CNN the city is looking at the windy coast off Queens, Brooklyn and Long Island for turbines that could generate 10 percent of the city's electricity needs within 10 years.

Bloomberg said he would also ask investors and private companies to study how these technologies can be built and integrated into the city's fabric.

"When it comes to producing clean power, we're determined to make New York the No. 1 city in the nation," he said.

But he said the alternative power projects that are now on the drawing board "won't produce their first kilowatts of electricity for many years."