Woman hurt in Olympics stabbing back in U.S.

BEIJING, China (CNN) -- The woman whose husband was killed in a knife attack while attending the Summer Olympic Games in Beijing, and who was herself critically wounded in the attack, is back in the United States, according to her doctors. 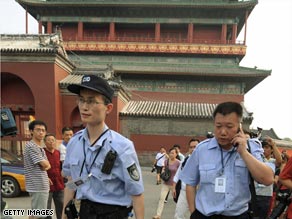 Chinese police are shown at the Drum Tower in Beijing last weekend.

Barbara Bachman arrived at the Mayo Clinic in Rochester, Minnesota, late Friday morning, according to a written statement from the hospital.

The release says Bachman suffered "significant and life-threatening abdominal injuries" in the attack, which happened at a tourist site in Beijing last Saturday. She was listed in fair condition.

Her husband, Todd Bachman was killed in the attack. The stabber, a divorced and recently unemployed man from the eastern city of Hangzhou, committed suicide after the attack by jumping from the ancient Drum Tower, a popular tourist attraction.

The couple's daughter is married to U.S. men's indoor volleyball head coach Hugh McCutcheon. It is not believed the couple were targeted for being Americans, with authorities calling the stabbings "an isolated criminal act."

The clinic said Bachman was "alert, talking, and has good memory function" and that she received "excellent care" while in China, where she underwent surgery after the attack.

All About Beijing • Olympic Games