WASHINGTON (CNN) -- Water with trace amounts of radioactivity may have leaked for months from a U.S. Navy nuclear-powered submarine as it traveled around the Pacific to ports in Guam, Japan and Hawaii, Navy officials told CNN on Friday. 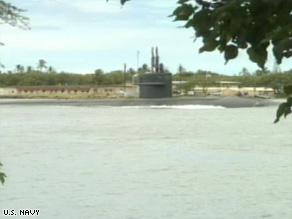 The USS Houston arrives in Pearl Harbor for routine maintenance, during which the leak was found.

The leak was found on the USS Houston, a Los Angeles-class fast attack submarine, after it went to Hawaii for routine maintenance last month, Navy officials said.

Navy officials said the amount of radiation leaked into the water was virtually undetectable. But the Navy alerted the Japanese government because the submarine had been docked in Japan.

The problem was discovered last month when a build-up of leaking water popped a covered valve and poured onto a sailor's leg while the submarine was in dry dock.

An investigation found a valve was slowly dripping water from the sub's nuclear power plant. The water had not been in direct contact with the nuclear reactor, Navy officials said.

Officials with knowledge of the incident could not quantify the amount of radiation leaked but insisted it was "negligible" and an "extremely low level." The total amount leaked while the sub was in port in Guam, Japan and Hawaii was less than a half of a microcurie (0.0000005 curies), or less than what is found in a 50-pound bag of lawn and garden fertilizer, the officials said.

The sailor who was doused, a Houston crew member, tested negative for radiation from the water, according to Navy officials.

Since March, the Houston had crisscrossed the western Pacific, spending a week in Japan and several weeks in both Guam and Hawaii, Navy officials said.

See a timeline of the sub's movements »

The Navy on Friday notified the Japanese government of the leak, the officials said, and told them it was possible the ship had been leaking while in port in Sasebo, Japan, in March.

While Japan has agreed to allow U.S. nuclear-powered ships in Japanese ports, the decision was a not popular in Japan.

The Houston incident comes at a time when the Navy is trying to smooth over a problem with a nuclear-powered aircraft carrier.

The USS George Washington was due to replace the aging, conventionally powered USS Kitty Hawk this summer as the United States' sole carrier based in Japan.

While en route to Japan this May, a massive fire broke out on the George Washington, causing $70 million in damage. The fire was blamed on crew members smoking near improperly stored flammable materials.

There was no damage or threat to the nuclear reactor, but the ship was diverted to San Diego, California, for repairs. It now is expected to arrive in Japan at the end of September.

The Navy this week fired the captain and his deputy, saying an investigation into the fire led to a lack of confidence in the leadership of both men.

Just two weeks ago, thousands of Japanese protested the pending arrival of the George Washington.

All About U.S. Navy • Nuclear Energy