Behind the Scenes: Black and shopping in America

Editors note: In our Behind the Scenes series, CNN correspondents and producers share their experiences in covering news and analyze the stories behind the events. For the past 18 months, CNN's Soledad O'Brien has been working on "CNN Presents: Black in America" which airs July 23 and 24, at 9 p.m. ET. 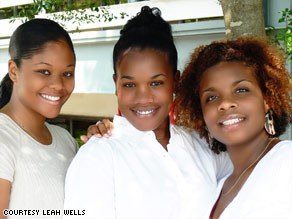 (CNN) -- For Atlanta native Leah Wells, it's the humiliation she remembers most.

Not long ago, Wells sent me a note and forwarded a letter she had just mailed to Glenn Murphy, chairman and CEO of Gap Inc. The letter detailed what happened when Wells and two girlfriends decided to ditch the gym during an office lunch break and do some "power-shopping" instead. The three young women, all in their 20s and all black, ended up detained on suspicion of shoplifting.

"We were dressed professionally," Wells told me. "It was casual Friday. We had on dresses and casual office wear. We were racially profiled. It was as simple as that."

At about 1:15 p.m., mall security contacted Gwinnett County police saying there was a group involved in shoplifting. The police department says four officers arrived at the mall about 10 minutes later, and security pointed out Wells and her two friends as they walked away from the Old Navy store. Old Navy is owned by GAP. The officers asked the three to return to the store.

Wells says six officers were involved, not four, and that she and her friends were detained for "about an hour and a half"; the police say it was 29 minutes.

In her letter to Murphy, the GAP CEO, Wells describes enduring "disdainful stares from the mothers and grandmothers and children entering the store."

In the next installment of CNN's Black in America series, Soledad O'Brien examines the successes, struggles and complex issues faced by black men, women and families, 40 years after the death of the Rev. Martin Luther King Jr.
Watch July 23 and 24, at 9 p.m. ET

Police found no stolen merchandise on Wells or her friends. But Wells says neither the police nor the store managers bothered to apologize. Gwinnett Police say their officers were responding to a call and that the three women detained had thanked the officers for looking into the allegations thoroughly.

The fact remains that Wells and her friends were wrongly detained.

"No matter your education, your status or profession, some still only see the color of your skin," Wells wrote two months after the event.

Leah Wells tells me she is "coming to an understanding" with GAP. When I contacted GAP myself, a spokesperson told me that an internal investigation led to the firing of a manager. Later the spokesperson e-mailed this statement: "We realize it's probably too late. We regret that we did not apologize for what these ladies experienced at our store, and this goes against everything we stand for as a company."

Wells has decided to not only get mad but get active, writing and talking about what happened to her and her friends on a day they just set out to do some shopping.

Sad to say, but it's a common refrain from black people in this country. All of us know someone who has, or have ourselves, been stopped for no apparent reason while driving or been searched for fitting a description.

It happened to my brother Orestes. A Harvard medical student at the time, he was visiting a friend in Brooklyn, New York, when he was stopped and searched by officers late one night. He "fit the profile" of a robbery suspect. They dumped his belongings in the street and made him lie face-down. What infuriated him was that no apology ever followed when it became clear the cops got it wrong. It seemed no one felt that one was owed. My brother was seething when he told me the story. It happens all the time.

And it happens across the geographic and socioeconomic spectrum: rich, poor and in between. What surprised me most often during our production of "Black in America" were the universal stories of blacks followed or profiled. It was shocking to me. iReport.com: Share your experiences

So many parents told me of sitting down with their sons starting at 12 years old to tell them what to do if pulled over by the police so as not to get shot. I don't imagine many white parents even think such a conversation is necessary with their teenage sons.

We've spent the past 18 months trying to accurately tell the story of black people in this country, a story rarely told with the depth and fullness it requires. Black people are seen frequently as rappers and "ballers" and sometimes exceptional, like Secretary of State Condoleezza Rice. But coverage of the vast black middle class is nearly nonexistent.

Watch what blacks have to say about the documentary »

I'm the product of a white father who's Australian and a black mother who's Cuban. They married in the United States in 1958 but had to leave their neighborhood of Baltimore, Maryland, because interracial marriage was illegal in that state.

By the time my little brother Orestes was born in 1967 -- the sixth O'Brien child -- the Supreme Court finally changed the law and lifted the ban on interracial marriage. When I tell that story in speeches, older folks in the audience nod their heads while younger ones gasp. It was illegal for my parents to marry, and it wasn't all that long ago.

Black and white people need to talk about our shared history -- policies that have held some people back, opportunities that some have not sought. My sense is the time is right for this dialogue on race. With a black man running for president Americans are talking about race every day.

Making a change is not for the weak willed. Our documentary "Black in America" will make you proud and angry, hopeful and frustrated. Please, go out and DO something about what you're seeing and feeling. Give your money, give your time, write op-eds, commit to changing the part of reality that's not good.