Commentary: Me and my brother and black America

Editor's Note: Michael Eric Dyson is a University Professor of Sociology at Georgetown University, and author of 16 books, including the New York Times bestseller, "April 4, 1968: Martin Luther King, Jr.'s Death and How it Changed America." 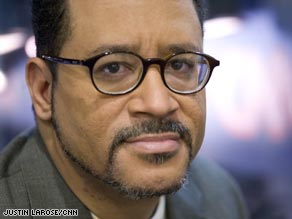 Best-selling author Michael Eric Dyson's life is vastly different from his brother's, who is serving life in prison.

(CNN) -- Whenever the segment featuring me and my imprisoned brother, Everett, from Soledad O'Brien's searing CNN special "Black in America" airs nationally, I invariably receive an e-mail, call or comment from a black person saying our story is their story.

Not necessarily our particular truth -- one brother, an author and professor, the other a prisoner incarcerated with a life sentence -- but something close. So many black families are plagued by a similar mathematics of misery: variously stable and prospering members are divided from loved ones behind steel bars and sharply varying educational achievement, bracketed by the cruelly ironic twists of fate.

One may teach, as I did for years, at Penn. The other, like my brother, could be locked away in the pen.

The temptation is to believe that individual choice alone accounts for such differences in destiny. Successful black family members did their work and played by the rules; suffering family members ran afoul of the law and were justly locked away.

Of course, that is true in many cases, but in far too many cases, it's not the entire truth.

By the end of the last century, there were nearly a third more black men in prison and jail than in colleges and universities. That means the number of black men in jail or prison has increased fivefold in the last 20 years. In 1980, at the dawn of the prison construction boom, black men were three times more likely to be enrolled in college than incarcerated.

CNN's Soledad O'Brien sits down with Michael Eric Dyson and his brother to talk about their radically different experiences and she examines the successes and struggles black men in America -- 40 years after the death of Rev. Martin Luther King Jr.
Watch tonight, 9 p.m. ET

In effect, the cellblock or classroom choice is oppressive. We would permit no other population of American citizens to be locked away with such callous disregard for the educational opportunity that might help stem the tide of incarceration.

Everett certainly made self-destructive, choices: He sold drugs and admitted he was a pariah to his community. But he is innocent of the charge of murder for which he is serving a life sentence in Michigan.

And he is not alone. There are thousands of black men who are rotting in jail cells who have done nothing to merit incarceration. And even when they get in trouble, a great number of black men go to prison for nonviolent drug offenses. Often, crippling racial profiling and suspicion of black men put them on a path to prison, while white males who commit similar offenses are arrested and convicted in far smaller numbers.

The point is not affirmative action for black thugs. The point is that white males often get second, third and fourth chances for reform -- either because they weren't suspected to begin with, or they are given far lighter sentences and far more favorable treatment -- while black males are severely punished for even relatively small infractions.

Besides the choices we made, Everett and I are also examples of an ugly trait that persists in black communities: the ruin of color consciousness. I am a light-skinned brother; Everett is a deep chocolate black man.

I am not suggesting that the mere difference in shade has led to his brutal circumstances and my rise. I am arguing, however, that the persistence of colorism -- a sometimes subtle hierarchy of social standing historically dictated in part by darkness or lightness of one's skin, measuring the proximity to, or distance from, the vaunted white ideal -- affected how he was viewed as a developing youth, impacting the view of what gifts he might possess while shaping the presence or absence of social opportunities open to him.

It is true that many darker skinned blacks prosper, and that lighter skinned blacks suffer. But their relative successes and failures are often unconsciously molded in a crucible of race that assigns higher value to the physical features and cultural traits that reflect those of the dominant society.

Everett is a highly intelligent young man who made grievous errors in his life, but none that deserve the fate he presently suffers. It pains me deeply -- often, by myself, to tears -- to see him suffering so long for a crime that he didn't commit. It hurts as well to know that prisons are being built to fit the failures and struggles of other young black and brown men just like him.

I feel an obligation to raise my voice in defense of millions of young black and brown men and women who may one day follow his path. I want to warn them away from the destructive personal habits that make them vulnerable to prison.

But I must also cry out against a society that would punish them in such unforgiving fashion while extending mercy to millions more who aren't poor or black.

In my mind, that inequality and injustice are the real crimes.

All About Prisons • Colleges and Universities • African-American Issues