(CNN) -- The agency that regulates Mississippi's casinos got pillows, stoves, dinnerware and other items meant for Hurricane Katrina victims, according to state records obtained by CNN. 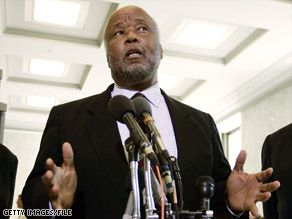 Rep. Bennie Thompson says he'll hold a hearing into how supplies for Katrina victims were diverted.

The Mississippi Gaming Commission was among 11 state agencies that received the household items from the state's surplus agency.

A breakdown of what each agency received shows the commission took a coffee maker, a case of pillows, wash kits, two dual-burner stoves, plates and utensils, two cases of hand sanitizers and 20 five-gallon containers.

Larry Gregory, executive director of the Mississippi Gaming Commission, could not be reached for comment. But an aide, Becky Clark, said the agency is keeping the items "in case of another hurricane."

The Mississippi Department of Corrections also got 20 coffee makers, 15 tents, four cases of pillows, five cases of men's underwear and other supplies.

A CNN investigation revealed in June that for two years after Hurricane Katrina, the Federal Emergency Management Agency stored 121 truckloads of household items that were purchased or donated for Katrina victims. FEMA eventually declared the items surplus, saying it was too expensive to keep warehousing them, and then offered them to federal agencies and states.

Sixteen states, including storm-ravaged Mississippi, took the items. However, CNN discovered that those items were given to the 11 state agencies, schools, cities and fire departments rather than being distributed to residents trying to rebuild their homes.

Leaders of nonprofit groups helping Katrina victims were astounded when CNN showed them photos of the FEMA supplies. All said they were unaware that such supplies were available.

In response to the CNN stories, the chairman of the House Homeland Security Committee said he will hold a hearing on the matter. Rep. Bennie Thompson, D-Mississippi, says he plans to ask FEMA officials why the supplies were stored for two years.