(CNN) -- Federal officers charged with keeping terrorists off planes are now searching their own ranks for staff who told CNN that few flights were protected by air marshals. 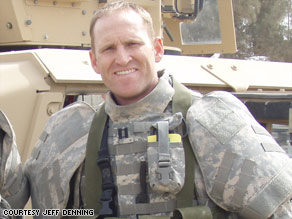 Iraq war veteran Jeff Denning says a TSA investigator called him trying to find out if he spoke to CNN.

The Transportation Security Administration rejected as a "myth" CNN's report that less than 1 percent of the nation's daily flights carry armed federal air marshals. Now the agency is conducting an investigation into who talked to CNN and who encouraged other agents to do the same.

A spokesman for the TSA confirmed the investigation.

Spokesman Christopher White said a TSA investigator is looking into the "possible unauthorized release of sensitive and classified information to the news media by covered parties."

"As part of this ongoing investigation, several individuals, both current and former employees, have been contacted as is typical in any investigation," he said in an e-mail to CNN.

CNN spoke to more than a dozen current and former air marshals, pilots and federal law enforcement officials for the report, which aired in March on "Anderson Cooper 360º." Repeatedly, the sources told CNN that as few as 280 of an estimated 28,000 daily flights had armed federal air marshals aboard. That amounts to less than 1 percent.

"That number is absolutely wrong," said Kip Hawley, the head of the agency.

He was speaking earlier this year before Congress, which held hearings into the Federal Air Marshal Service (FAMS) in the wake of CNN's reporting.

CNN learned of the TSA investigation from a former federal air marshal and Iraq war veteran, Jeff Denning. He was not connected to the original story.

Denning said he was called by TSA investigator Greg Neiderer a few days after he came back from the front lines of Iraq.

Denning said Neiderer grilled him on an e-mail he received on his personal account while he was in Iraq.

The e-mail discussed plans to expose corruption in the air marshal service. The e-mail encouraged recipients to contact CNN correspondent Drew Griffin if they had information about the hiring of airport screeners as air marshals, the elimination of mandatory psychiatric tests for new hires and managers lying to Congress.

CNN only recently received a copy of the e-mail. CNN did not have it when the report aired in March.

Denning said he forwarded the e-mail to current and former air marshals.

Denning said Neiderer wanted to know who sent him the e-mail.

Nothing in the e-mail contained sensitive security information, Denning said, nor did it encourage anyone to disclose information that could endanger the public.

"I was petrified," Denning said of Neiderer's phone call, explaining how he contacted CNN full of dismay that the TSA was harassing him and his family to find out which of his former colleagues had talked to the media.

"In Iraq, there were a lot of dangerous things, but never have I been so scared [as] when the federal government called me on my home phone and said I want to know about your personal e-mail account and what you have been sending."

TSA's Hawley refused repeated requests to be interviewed by CNN. Neiderer did not return repeated calls or e-mails.

In an e-mail, TSA spokesman White confirmed Neiderer's involvement, but denied that the TSA or the Federal Air Marshal Service had accessed anyone's private e-mail accounts, via subpoena or otherwise.

However, he added that "all e-mails sent to government employees on a government system are always eligible to be read and reviewed as is outlined on every computer in TSA, including the FAMS."

White did not say how much the investigation is costing taxpayers or how long it would last.

With a few phone calls, CNN was able to find the author of the original e-mail.

The author is an air marshal who asked that his identity be concealed for fear of retribution by the TSA.

The marshal said he sent the e-mail because for six years, his colleagues have been trying to alert Congress about continuing problems in the air marshal service. Many have left, he said, because of low morale and complaints about management.

A May 2008 report from the Department of Homeland Security Office of the Inspector General said that the agency "currently experiences a 17% voluntary attrition rate and low employee morale."

"Congress doesn't want to hear it," the marshal said. "They stick their heads in the sand. We tell them about the corruption. We give them examples and proof and I think they are scared of what they see. And they don't want to deal with it."

The marshal said he had done nothing wrong by sending an e-mail.

"The only thing in my e-mail was my telling these other air marshals that CNN was willing to expose the corruption in the federal air marshal services and Mr. Griffin's e-mail address," he said.

He said he sent another e-mail urging air marshals to contact members of Congress investigating the air marshal service.

Meanwhile, the air marshal service is undergoing a management change.

Shortly after CNN aired its first report, director Dana Brown announced plans to retire. He has since decided to stay with the air marshals in a newly created position of Integrity Officer.

His successor is Robert Bray, current deputy director, who, like Brown and Neiderer, is a former Secret Service employee.

According to the TSA, Brown's job is to ensure that "disciplinary measures and other personnel actions are administered uniformly throughout the organization."

Former air marshal Denning said he thinks the TSA should spend its time tracking down terrorists instead of former employees' e-mails.