WASHINGTON (CNN) -- The U.S. military will continue to use cluster bombs but will try to reduce the number of civilian casualties by redesigning them so there are fewer ordnances that detonate long after the weapon is fired, officials said Wednesday. 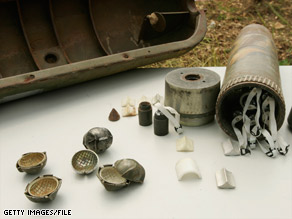 Parts of a cluster bomb can explode on the ground long after the bomb is fired.

The new policy requires that by 2018 the United States use only a new style of cluster bomb -- one with a 99 percent detonation rate for the hundreds of bomblets released from each of the scatter-style weapons.

A cluster bomb, when dropped from an aircraft or missile, releases hundreds of smaller explosives each the size of a grenade. When the bomblets detonate, they send shrapnel over an area about the size of a football field.

A number of the bomblets have remained undetonated until handled or stepped on by civilians -- often children. In 2006, the top United Nations aid official called Israel's use of cluster bombs in the last three days of that summer's war with Hezbollah "immoral."

The U.N. said that 100,000 deadly bomblets dropped in 2006 were still lying unexploded across areas of southern Lebanon, where they are maiming and killing people.

Under the new U.S. policy, cluster bombs in its arsenal will be destroyed if they don't meet the 99 percent requirement.

In addition, the Department of Defense will begin disposing of excess cluster bombs in its inventory "as soon as possible," according to a Pentagon statement released Wednesday.

The policy change comes as international pressure builds for a ban on cluster bombs.

The United Kingdom in May joined more than 100 other countries in signing an international treaty that would ban cluster munitions and require that stockpiles be destroyed within eight years.

The treaty is expected to be ratified at the end of the year in Oslo, Norway.

The United States, Russia, Pakistan, Israel, China and India, all makers of cluster bombs, boycotted the May talks.

Pentagon officials have said cluster bombs save the lives of U.S. troops and have a legitimate role in its arsenal.

"They provide distinct advantages against a range of targets, where their use reduces risks to U.S. forces and can save U.S. lives," according to a Pentagon statement.

Dud rates, the number of bomblets that fail to explode, can range from 3 to 16 percent, according to military watchdog groups.

Sen. Patrick Leahy, a Vermont Democrat who opposes cluster munitions, in June sponsored a joint resolution calling on the Bush administration to sign the Convention on Cluster Munitions treaty.

"The Pentagon continues to insist that cluster munitions are necessary, but the country with the world's most powerful military should not be on the sidelines while others are trying to protect the lives and limbs of civilians in war," Leahy said at the time.

All About The Pentagon • United Kingdom