(CNN) -- The relatives of a woman who died on the floor of a New York hospital say they plan to file a $25 million lawsuit against the city and the facility where Esmin Green died. 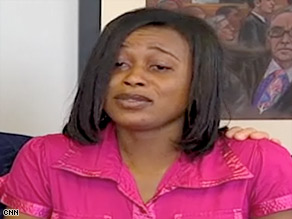 Esmin Green's daughter, Tecia Harrison, says disciplinary action against hospital workers is not enough for her.

Green's family is also calling for criminal charges against hospital workers, who they say failed to help her and then attempted to cover up the circumstances of her death.

"My sister was killed twice," said Brenda James, Green's sister. "First, by those who neglected to offer her the needed health care. Secondly, she was killed by those who tried to cover up this criminal action."

The family has retained a lawyer, Sanford Rubenstein, to file the suit.

Green, a Jamaican immigrant, had been involuntarily admitted to the Kings County Hospital in Brooklyn, New York, on June 18 for what the hospital described as "agitation and psychosis."

Surveillance camera footage captured the mother of six sliding off of a chair and onto the floor of waiting room of the hospital's psychiatric emergency department, where she lay convulsing for more than a hour before anyone helped her.

The footage appears to capture several employees passing by her as she lay on the floor struggling.

The New York Civil Liberties Union said last week that the hospital falsified medical records for the timeframe covering Green's visit, describing her as awake and going to the bathroom when she is seen on the video.

Seven workers, including doctors, nurses and security guards, have been fired or suspended since Green's death, the city's Health and Hospitals Corporation said. It's not clear whether any of the employees have appealed the disciplinary actions against them.

The agency said it referred the matter to law enforcement and is cooperating with the investigation.

"We failed Esmin Green and believe her family deserves fair and just compensation," it said in a statement.

Autopsy results have not been released.

Green's daughter, who reluctantly watched the footage for the first time this week, says disciplinary action doesn't make up for her family's loss.

"Firing is not enough for me, for my brothers. They don't know this wonderful woman they took away from us," said Tecia Harrison, who traveled to New York from Jamaica to attend her mother's funeral Sunday.

All About Kings County Hospital