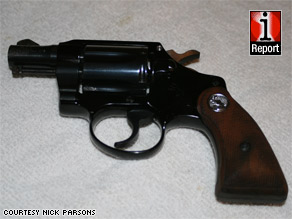 Nick Parsons of Orange County, California, said a handgun can be used for recreation as well as self-defense.

CNN.com readers had diverse reactions to the ruling, with many saying the decision upholds the Constitution and others questioning the danger of having guns in one's possession.
iReport.com: See arguments for and against gun ownership

Below is a selection of the responses submitted to iReport.com, some of which have been edited for length and clarity:

Nick Parsons of Orange County, California
I 100-percent agree with the decision to allow guns in D.C. The ruling has been constitutional all along and people have finally seen that. There will always be violence created around guns, but what most people don't realize is, gun laws don't hurt criminals, gun laws hurt law-abiding citizens. A criminal doesn't care if it's illegal to own or carry a gun, he's going to do it anyway. Its the responsible gun owners who get hurt. It's people who follow the law that can't defend themselves. Gun laws don't stop crime, they stop defense.

As long as a bad guy has a gun (and they always will) he will use it, and no one can stop him, especially not some stupid law. It's our responsibility to uphold the Second Amendment's right for law-abiding citizens to defend ourselves.
iReport.com: Watch William Bernstein share his views on gun ownership

Hargis4Pres: The U.S. Supreme Court ruled that the Washington, D.C., gun ban is unconstitutional, now comes the question of whether our elected officials can feel safe and secure in their visits to Washington. I mean, no one really likes Congress, the House or even the president, we just vote for them because they are party favorites. Now comes the time to watch Washington spend more to feel safe.

I predict politicians will contact their party donors and begin to spend billions on moving Washington citizens out of D.C. and into rural Virginia and Maryland, to make Washington citizen-free. Then will come the walls and moats.

But seriously, the war will end soon and the budget will increase to secure our officials ... When it comes to the safety of political Washington -- the war, Americans, terrorism and the free world will have to wait.

oback: I am very happy with the court's decision today. Not only does this ensure that as Americans we have a right to own firearms, it reinforces the most important right we have as Americans. The "militia only" argument is false. "The right of the people to keep and bear arms" refers to exactly that.

Citizens own firearms, subjects do not.

John Folk of Oswego, New York
The Second Amendment states simply "in order to maintain a well-regulated militia, the right to keep and bear arms shall not be infringed." The purpose of this amendment was to provide arms for a rapidly available military force in the form of citizen-soldiers in the event of attack.

This was the reality of 1791; the British would invade and the citizen-soldier was ready to defend the new nation. Over 200 years later, the role of the militia has been assumed by the National Guard, Reserves, active military, and a variety of law enforcement agencies.

The debate about an individual's right to own firearms for individual purposes is not relevant to the purpose or nature of the Second Amendment. It seems to be that the five justices in the majority might not have scored well in the reading comprehension portion of the LSAT.

DizzyDanZ: It's about time citizens can protect themselves against hooligans and thugs. Criminals do not buy guns legally , they buy them on the streets. The police are no longer above the law. Kudos to the five brave justices who supported freedom!

blueken: Washington, D.C., has the highest murder rate in the world. I remember when we invaded Iraq there was one week that D.C. had more gun shot fatalities than Iraq. I'm sure now there will be more handguns available to be stolen or sold for profit to criminals.

Time magazine documented the gunshot fatalities in the United States in one week. I think there were 400. It was a long time ago and I don't remember the exact figures but it went something like this: Suicides, 70 percent; shot in the heat of the moment by someone close to the victim, friend or family, 25 percent; accidental discharge, 5 percent. Not one death occurred that week during a crime event. Not one death that week in an act of self-defense.

I just don't understand. Maybe the reason we can't get reasonable gun control in this country is because we export more weapons than the next two largest exporters of guns. Well, I guess now it's time for people to start calling me names because I have a different point of view.