GULFPORT, Illinois (CNN) -- All roads in the town of Gulfport, Illinois, lead to nowhere. They all hit a dead end into Mississippi River floodwaters. 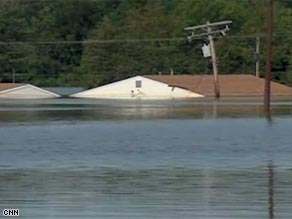 Most businesses and homes in Gulfport, Illinois, are underwater. Only 28 residents had flood insurance.

The small town in western Illinois was devastated Wednesday when two levees failed about 45 miles south. Tuesday, all that was visible were a few signs and rooftops.

"It almost looked like a tidal wave coming across the land," recalls Rick Gerstel, a resident of Gulfport. "Almost like the end of the world is what it looks like."

The water barreled through with such force, it knocked Gulfport's town hall off of its foundation, and the walls of some brick and mortar buildings collapsed. Most businesses and homes are underwater.

But none of this was supposed to happen -- at least that is what residents believed.

Gulfport was protected by a levee rated to withstand a 100-year flood. Although it wasn't designed to protect the town from a flood on the scale of last week's, it was enough protection that the Federal Emergency Management Agency did not require business or homeowners to purchase flood insurance.

Only 28 of the town's 200 residents had federal flood insurance. The rest trusted that the levees would hold. Residents Rick and Gina Gerstel, who lost everything, say no one from their bank to the municipal or federal governments ever told them they were at risk and ought to buy flood insurance.

Some residents said they felt misled about the risks of not having flood insurance. They said they thought the chances of a catastrophic flood were miscalculated.

Sen. Chris Dodd, D-Connecticut, agrees. He supports legislation that would require anyone living in an area protected by a levee to have flood insurance.

"I don't know how you define 'protected' or call that protected when you're telling people 'you don't have to have this; you don't need it' ... and you're watching families being devastated," Dodd said. "But the opportunity to get on their feet again is going to be very difficult for many families. And that's one of the major shortcomings in the flood insurance program."

FEMA says its risk assessment of Gulfport was accurate, and the agency is spending $1 billion to upgrade outdated maps and re-evaluate flood dangers.

"We do our best to advertise the availability of flood insurance and encourage people to purchase it," said Terry Reuss Fell, regional chief of FEMA's floodplain management. "We implement the laws that are given to us and the laws right now deal with the floodplains management within that 100-year floodplain and the insurance purchase requirements in that area also."

The flooding could have been worse, according to officials, if the federal government had not purchased low-lying land after the historic floods in 1993, which caused $12 billion in damage.

Since then, the government bought out more than 9,000 homeowners, turning much of the land into parks and undeveloped areas that can be allowed to flood with less risk. FEMA has moved or flood-proofed about 30,000 properties.

But those changes are little consolation for the Gerstels and other uninsured residents who have lost everything and can't afford to rebuild.

"Will you ever go back to that house?" CNN asked the Gerstels.

"No, sir. I would not go back to the town," Rick Gerstel said. "I would never live there again."