(CNN) -- Tim Russert, who became one of America's leading political journalists as the host of NBC's "Meet the Press," died Friday, the network said. He was 58. 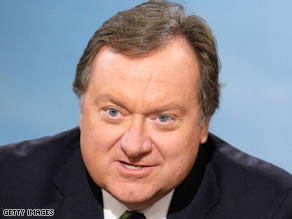 Tim Russert established himself as the face of NBC's political journalism as host of "Meet the Press."

The network said the award-winning journalist collapsed at work Friday. He was taken to Washington's Sibley Memorial Hospital, where he died, the hospital confirmed.

Russert had just returned from a family vacation in Italy with his wife, journalist Maureen Orth, and son, Luke, to celebrate his graduation from Boston College, Brokaw said.

"I think I can invoke personal privilege and say this news division will not be the same without his strong, clear voice," Brokaw said Friday.

"He will be missed as he was loved -- greatly."

Friends and colleagues remembered Russert on Friday not only as one of the country's most respected and influential political journalists, but also as a friend, a devout Catholic and an avid sports fan, especially when it came to his home team, the Buffalo Bills.

"I just loved the guy. He had this enthusiasm about all of the things that life brings to you," said James Carville, who often attended Washington National games with Russert. "My wife and I are in a complete state of utter shock."

Watch as Carville describes his friendship with Russert »

Russert was born May 7, 1950, in Buffalo, New York. His parents were Timothy John Russert Sr., or "Big Russ," a newspaper truck driver and sanitation worker, and Elizabeth Russert.

Buffalo Mayor Byron W. Brown ordered that all flags on city property be lowered immediately to half-staff in Russert's honor.

He was a graduate of Canisius High School, John Carroll University and the Cleveland-Marshall College of Law. He was a member of the bar in New York and the District of Columbia, according to a biography on CNBC.com

Russert joined the network in 1984 and quickly established himself as the face of the network's political coverage, eventually becoming senior vice president and Washington bureau chief of NBC news.

His career at NBC was marked by a number of milestones. In 1985, Russert supervised live broadcasts of the "Today" show from Rome, Italy, negotiating an appearance by Pope John Paul II -- a first for American television.

He was also the recipient of numerous awards for his work, including an Emmy in 2005 for his coverage of the funeral of President Ronald Reagan.

His rise to prominence coincided with his success as the best-selling author of two books, 2004's "Big Russ and Me" and 2006's "Wisdom of Our Fathers," which documented his journey from blue-collar beginnings to law school to Washington powerhouse.

The memoirs, both of which were New York Times best sellers, transformed the award-winning journalist into the son of Big Russ, a Buffalo Bills fanatic, and finally, a husband and father.

"Tim was a true child of Buffalo and the blue-collar roots from which he was raised," Brokaw said Friday. "For all his success, he was always in touch with the ethos of that community."

Russert credited his upbringing with helping him keep his ego in check as he became the man who interviewed presidents and important politicians of the day. iReport.com: Send your memories of Russert

"If you come from Buffalo, everything else is easy. Walking backwards to school, for a mile in the snow, grounds you for life," Russert told the Washington Post's Howard Kurtz in 2004. "Plus, if you have a family the way I do, it's a daily reality check."

Russert, who also served as a political analyst for cable network MSNBC, took the helm of "Meet the Press" in 1991, turning the long-running Sunday-morning interview program into the most-watched show of its kind in the United States.

During his 17-year run as the host of "Meet the Press," the longest of any host in the show's 60-year history, Russert earned the respect and admiration of many journalists and politicians.

"He was an institution in both news and politics for more than two decades. Tim was a tough and hardworking newsman. He was always well-informed and thorough in his interviews. And he was as gregarious off the set as he was prepared on it," President Bush said Friday.

His professionalism earned him many accolades. The Washingtonian Magazine once dubbed Russert the best and most influential journalist in Washington, describing "Meet the Press" as "the most interesting and important hour on television."

In 2008, TIME magazine named him one of the 100 most influential people in the world.

Brokaw described Russert as a political junkie who threw himself into his work during this year's presidential contest.

"This was one of the most important years of Tim's life for many reasons," Brokaw said. "He loved this political campaign. He worked himself to the point of exhaustion many weeks."