The case against James Earl Ray 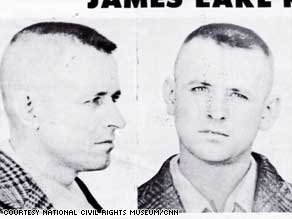 James Earl Ray was a prison escapee who used aliases on the run before setting out to kill the civil rights leader.

That's the way James Earl Ray was described by his accomplice in an armed robbery, telling the story afterward to his brother, Jerry Ray.

"He said, 'I never been with nobody as bold as he is,' " Jerry Ray told CNN. "He just walked in and put that gun on somebody, it was just like it's an everyday thing."

By the time James Earl Ray was identified as the killer of the Rev. Martin Luther King Jr., he was a two-bit criminal and four-time loser, on the run as an escapee from prison, where he had spent most of his adult years.

Ray stole a typewriter and went to jail in Los Angeles, California; he botched a taxicab robbery in Chicago, Illinois, and served two years; he was caught with stolen postal money orders and went to federal prison for three years, then was nabbed in a grocery holdup in St. Louis, Missouri. That time, Ray was sentenced to 20 years as a habitual criminal.

Ray escaped from the Missouri State Prison almost a year before the murder of King. He fled to Canada, failed to get on a ship headed overseas, came back to the United States and went to Alabama to establish a new identity, then spent time in Mexico and Los Angeles before setting out on the trail of the civil rights leader 2½ weeks before the assassination.

Despite his guilty plea to the murder, Ray would always insist that a shadowy character he met in Canada -- a mystery man named Raoul -- told him to buy the rifle, meet him in Memphis and rent a room in the boarding house where authorities say the fatal shot was fired from a second-floor bathroom, across the street from the motel where King was staying.

As Ray fled the scene, a bundle was dropped in the doorway of a store beneath the rooming house. In it was a .30-06 rifle with one shot fired. It bore Ray's fingerprint, and he would admit he bought the gun. Also in the bundle were binoculars bought that afternoon, again with Ray's fingerprint.

That day's newspaper, which reported where King was staying, also bore Ray's fingerprint. In the same bundle were a pair of Ray's undershorts and other personal belongings, all wrapped in a green bedspread that Ray acknowledged was his.

There were weaknesses in the prosecution case. Two boarders in the rooming house could not identify the man they saw running from the bathroom after the shot, and ballistics tests on Ray's rifle could not conclusively link it with the mangled bullet that caused King's death.

Ray would admit to almost everything except firing the shot. He tried for years to reverse his guilty plea. He insisted Raoul or someone else must have dropped the bundle to implicate him.

Yet not a single witness could be located who saw the mystery man with Ray in his travels through Alabama, Atlanta, Georgia, and finally Memphis. Not a shred of physical evidence surfaced to implicate anyone other than Ray. Ray died in 1998 while serving a 99-year sentence for King's death.

"You have a guy who wasn't very bright. He wasn't a good criminal. He wasn't the sharpest tack," O'Brien said.

"He's plenty smart, intelligent," Jerry Ray said. "They don't catch him on the other crimes, you know. And so he done a lot of things he got away with."