WASHINGTON (CNN) -- Brand new runways are opening at three major airports Thursday, giving the aviation community something to cheer about in a year of dismal economic and travel news. 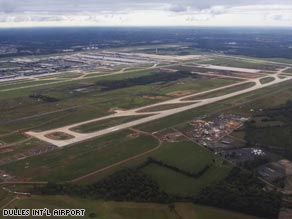 Washington Dulles International Airport will get a fourth runway, its first runway addition since the airport opened in 1962.

Chicago's O'Hare International Airport's new runway is part of a massive, multi-billion dollar modernization program. Previously, six of the airport's seven runways intersected. When the entire project is completed in 2014, the airport will have eight runways in parallel configurations considered safer and more efficient.

Seattle-Tacoma International Airport's new runway is being especially welcomed because of the region's notoriously wet climate. The airport's third runway will allow planes to take off and land two abreast during inclement weather. The current runways are too close to allow simultaneous operations in foul weather. Airport officials claim the new runway will cut delays in half.

See runways at the three airports »

"It is going to make a difference," Peters said. "It is going to allow us to conduct more operations, meaning more takeoffs and landings per hour at these airports and will help move passengers efficiently through.

"That, we hope, will give travelers a good experience this holiday season," she said.

President Bush, this week, touted the arrival of the three new runways, noting that 14 new runways will have opened during his administration.

However, aviation experts warn airport infrastructure still lags behind demand, and that real estate realities in the New York area, perceived to be the epicenter of aviation delays, mean that new runways are least likely to be built where they are most needed.

"It would really be nice if we had even one new runway" at each of the nation's most congested airports, namely LaGuardia, Newark and JFK," aviation consultant Darryl Jenkins said. "It would do an enormous amount to relieve congestion throughout the entire nation." iReport.com: What are your holiday travel plans?

Aviation experts argue the experience at Hartsfield-Jackson Atlanta International Airport in Georgia demonstrate that new runways are invaluable to airlines and travelers. A new runway that opened there in 2006 has increased operations by 25 to 30 flights an hour, shaved minutes off average flight delays and saved airlines $10 million a week in fuel costs, airport officials said.

Air traffic controllers are generally happy with the added concrete they will lord over.

"There's no greater supporter of runways than controllers," said Doug Church, spokesman for the National Air Traffic Controllers Association (NATCA). "It's reason to shout and celebrate from the rooftops."

However, the new Dulles airport runway may not be of much benefit at the start.

Controller Chris Sutherland, the NATCA representative for the Potomac Consolidated Terminal Radar Approach Control (TRACON), explained that because only one taxiway has been completed, planes that land heading north must roll to a stop, turn around and taxi more than a mile and a half to the taxiway, costing the airlines both time and money.

"Bottom line, the users are going to fight us tooth and nail if we try to land them on that runway out there," Sutherland said. The airport also does not have the technology necessary to use all three parallel runways in inclement weather, he said.

"We're actually creating delays with additional new concrete and that's kind of going against why we built it in the first place," Sutherland said.

An airport official and Department of Transportation officials said Washington-Dulles International Airport must open the new runway before it can close the center runway and complete work on the remaining taxiways. Work is scheduled for the spring.

Jenkins jokingly said new runways inevitably come on line precisely when they are not needed, but he said airline delays are here to stay.

"There's every reason to believe that until we're all comfortably dead, we will all enjoy delays in air traffic," Jenkins said.