Friday perfect for dancing in the moonlight

WASHINGTON (CNN) -- It won't be your imagination if the moon looks bigger and brighter Friday night, like "a cosmic flood lamp." 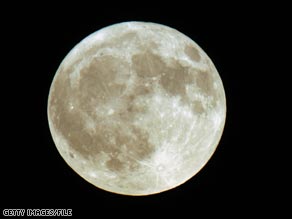 NASA says the moon will appear up to 14 percent larger and 30 percent brighter.

Every few years, a full moon coincides with the point in the satellite's elliptical orbit that brings it closest to the center of the Earth. Friday night, the moon will be fully illuminated just four hours after reaching that point, according to a feature story on the National Aeronautics and Space Administration's Web site.

The moon will appear up to 14 percent larger and 30 percent brighter than "lesser full moons we've seen earlier in 2008," NASA says -- provided it is being viewed in a clear sky.

The full moon, as always, will seem largest when it is near the horizon, as it rises and sets, "but it's really just an optical illusion," said NASA spokesman J.D. Harrington.

When the moon shines directly overhead, he said, it's hard to tell the difference in size.

On its Web site, NASA notes that "for reasons not fully understood by astronomers or psychologists, low-hanging moons look unnaturally large when they beam through trees, buildings and other foreground objects."

"If you go outside around midnight," NASA says, the moon "will be close to overhead and act like a cosmic flood lamp."

An alignment of the full moon and the orbital perigee occurs at most once in 1½ years, and Harrington says this year's phenomena shouldn't be much different from previous ones. The moon's brightness always varies with its distance from Earth, but having the full face of the moon illuminated emphasizes that variation.

The close approach of the moon and having the moon, Earth and Sun lined up -- as happens twice a month -- bring higher-than-normal ocean tides, so it is no surprise that having both at once means even higher tides.

The National Oceanic and Atmospheric Administration says the difference will be minimal. In most places the tide will be just an inch or so (a few centimeters) higher than normal "spring" tides, those that come with the new or full moon. Some locations might see a difference of up to 6 inches (15 centimeters), it says.