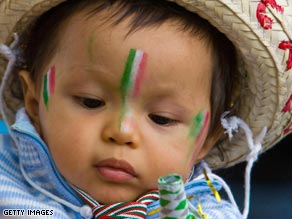 Would you be comfortable selecting what cosmetic features you want your baby to have?

Will you go for the brown hair or blond? Would you prefer tall or short? Funny or clever? Girl or boy? And do you want them to be a muscle-bound sports hero? Or a slender and intelligent book worm?

When you're done selecting, head to the counter and it's time to start creating your new child.

With rapid advances in scientific knowledge of the human genome and our increasing ability to modify and change genes, this scenario of "designing" your baby could well be possible in the near future.

Techniques of genetic screening are already being used -- whereby embryos can be selected by sex and checked for certain disease-bearing genes. This can lead to either the termination of a pregnancy, or if analyzed at a pre-implantation stage when using In Vitro Fertilization (IVF), can enable the pregnancy to be created using only non-disease bearing genes.

British scientists last week developed a "genetic MoT" test, which offers a universal method of screening embryos for diseases using a new technique of karyomapping, which is more efficient than previous processes.

The test would be taken on a two-day-old IVF embryo and is yet to be validated, but it could mark a significant change; allowing doctors to screen for gene combinations that create higher risks of diabetes, heart disease or cancer.

Experts estimate the test, if licensed by the Human Fertilization and Embryology Authority, could be available for around $3000.

In the future we may also be able to "cure" genetic diseases in embryos by replacing faulty sections of DNA with healthy DNA, in a process called germ line therapy. This has been performed on animal embryos but is currently illegal for humans.

Furthermore, the developing technologies of genetic alteration open up a whole new set of possibilities -- which could result in so-called "designer babies."

The technique -- known as inheritable genetic modification -- modifies genes in eggs, sperm or early embryos and results in the altered genes being passed on to future generations. Should parents be allowed to create their babies?

This could potentially irreversibly alter the human species. So, the obvious question arises: should we be doing this?

Some countries have made genetic screening or alteration illegal by law, and the ethical questions surrounding the uses of the technology are vast -- creating a palpable tension over the subject.

In September, Internet giants Google and Microsoft withdrew adverts for sex selection products and other services considered illegal in India when they were threatened with legal action.

The Center for Genetics and Society is trying to encourage debate on the topic -- as soon as possible.

Executive director of the organization, Richard Hayes, told CNN that the general public of most countries was missing out on taking part in the debate.

"The debate has taken place amongst scientists and science journalists, but average people feel overwhelmed with the technical detail. They feel disempowered."

Hayes said his organization supported the use of embryo screening to help prevent the passing on of serious diseases and disorders like Cystic Fibrosis, but is wary of other technologies and how genetic screening and alteration can be misused.

"We support the use of that to allow couples at risk to have healthy children. But for non-medical, cosmetic purposes, we believe this would undermine humanity and create a techno-eugenic rat race," Hayes said.

He said there were immense amounts of resources being poured into developing gene altering techniques and no laws in many countries to stop them from starting clinics that could offer selected cosmetic traits.

"As technology advances it is possible that any number of human characteristics in part influenced by genes could come under human control. Right now there is an enormous amount of research being conducted to correlate specific genes with specific characteristics."

One of the organizations researching genetic alteration is the University of California Irvine's Sue and Bill Gross Stem Cell Research Center.

Professor of biological chemistry and developmental and cell biology, and co-director of the Center, Peter Donovan, feels the research could have massive benefits.

"The ability to generate large quantities of cells with altered genes opens the door to new research into many devastating disorders.

"Not only will it allow us to study diseases more in-depth, it also could be a key step in the successful development of future stem cell therapies," Donovan

But according to Hayes the potential for misuse of this technology could have dire consequences for the human race.

"This runs many risks. It's used in many countries to avoid the birth of female children.

"The technologies are going to be accessible to affluent couples and would be used in ways that could increase inequality. The last thing we need now is a genetic elite.

"This designing aspect would also lead to an objectification of children as commodities."

Hayes said it was important that people began debating the issues now so the correct "rules, regulations and regulatory oversights" could be established before the technology was complete and accessible.