(CNN) -- A truck stop is an assault on the senses, especially on a hot summer day. There's the smell of diesel, the taste of exhaust fumes and the nerve-jangling, ever-present rumble of truck engines -- even when the drivers are asleep. 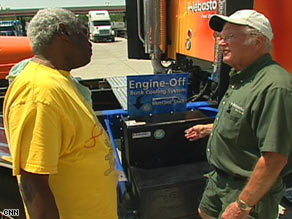 Buck Threehouse, right, explains the BlueCool system to a trucker at a Georgia truck stop.

Typically, truckers idle their engines during warm weather while they're resting, to keep the air conditioning on and the cabs cool.

Some truckers use devices that cool cabs without idling. Most of these technologies either use batteries, which eventually wear out and have to be replaced, or fuel, which emits pollution. But Webasto, a company that makes trucking equipment, has found an alternative.

Webasto calls the system BlueCool. The heart of the system is a 300-pound black box that's mounted on the truck's frame rail. As the trucker drives, the system sends refrigerant through a matrix of graphite and a water/glycol mixture inside the box, creating blocks of ice.

When the truck is stopped, the driver turns on an air handler that circulates coolant around the ice and blows cold air from the unit into the bunk area of the cab. The fan and circulation pump use only 3.5 to 10 amps from the truck's battery -- which means there's no danger of draining the battery, Webasto says.

"When it's running it doesn't have any emissions or use any fuel," said Thomas. He said BlueCool can maintain a comfortable bunk temperature for up to ten hours.

The Environmental Protection Agency (EPA) estimates idling trucks consume nearly one gallon of fuel per hour, while emitting nitrogen oxides and particulates, which contribute to smog. A growing number of states and municipalities forbid trucks from idling for more than a few minutes.

The pollution problem prompted Webasto to launch a campaign to raise awareness of the idling issue. It's called Make A Leap (Leap stands for Lowering Emissions and Particulates). The campaign's web site, http://www.makealeap.org/, is full of sobering state-by-state and national statistics. The site says 7.2 percent of the national daily oil consumption is attributed to heavy-duty truck idling.

To decrease that percentage and increase awareness of BlueCool, Webasto hired a trucker named Buck Threehouse to take a BlueCool-equipped truck on a summer publicity tour of truck stops across the country. The tour coincided with spiking fuel prices and appears to have succeeded -- Webasto sold 500 BlueCool units in July, its best month ever.

Threehouse said truckers have showed a lot of interest.

"What really sells the item -- they come and the truck's not idling. And all the trucks around me are idling," he said. Sometimes, he said, "they wake me up at 3:00 in the morning and ask me for brochures. They can't [wait until daylight], they have to deliver a load. And then they keep apologizing to me for waking me up."

On a hot recent day at a Georgia truck stop, truckers were especially attracted by the prospect of burning less diesel. Mo Ndow, who owns a small fleet of trucks, said, "Most drivers. . .are on the road 100 days a year, so basically the more days you're out there, the more money you spend trying to stay cool."

Ndow said his truckers currently use IdleAire, an electrical system trucks can plug into for cooling, heating, and other services like the Internet. But IdleAire is available only at a limited number of truck stops, and Ndow said he's considering BlueCool.

Webasto's Thomas said the installation price of a BlueCool system is approximately $5500. The system pays for itself in less than a year, he said.

It sounds like sales hype, but Thomas' comment is backed up by EPA statistics. The EPA estimates the typical truck idles 2400 hours per year. At $4 a gallon, that's $9600 in annual fuel costs.