Planet is running out of clean water, new film warns

(CNN) -- One sixth of the world's population does not have access to clean drinking water. More than 2 million people, most of them children, die each year from water-borne diseases. 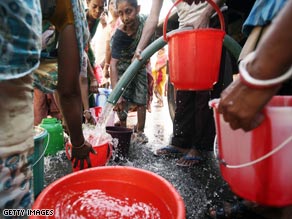 People in India, where millions don't have access to clean drinking water, fill buckets from a supply pipeline.

Water-related problems aren't restricted to the developing world. A harmful pesticide, banned by many European countries, remains widely used in the United States, where it runs into rivers and streams.

And one expert estimates California's water supply will run out in 20 years.

These sobering statistics come from "FLOW," a new documentary film about the world's dwindling water supply. The filmmakers and their sources argue a combination of factors, including drought and skyrocketing demand, have created a looming global crisis that threatens the long-term survival of the human race.

After premiering in January at the Sundance Film Festival, "FLOW" opened September 12 in New York and Los Angeles, California, and expands to more cities this week. The New York Times called the documentary "less depressing than galvanizing, an informed and heartfelt examination of the tug of war between public health and private interests."

As the film shows, some nations are banking on controversial technology, such as desalination plants that convert seawater into freshwater, to meet future water needs. Meanwhile, water has become a commodity that supports a $400 billion global industry -- the third largest behind electricity and oil.

CNN spoke to "FLOW" director Irena Salina and Maude Barlow, author of "Blue Covenant: The Global Water Crisis and the Coming Battle for the Right to Water." Some of their answers have been condensed.

CNN: Why do we have a global water crisis?

Barlow: The demand for fresh water in our world over the next 30 years is far outstripping the supply. Not that the water isn't somewhere on the planet still -- but we have polluted it, diverted it, allowed it to get poisoned by seawater. One way or another, we have taken accessible clean water ... and we have rendered it unusable. We take massive amounts [of water] and we irrigate the desert, where it evaporates. We're pumping groundwater all over the world far faster that it can be replenished by nature. We are actually running out of fresh, clean water everywhere in the world, including here in North America. We have to give up this myth of abundance. We have come to the limits of the planet.

Is climate change exacerbating the problem?

Barlow: Oh, yes. They are intricately linked. Global warming warms up massive bodies of water, which evaporate more quickly than they should. Warming is melting all the glaciers in the world. So there's no question that greenhouse gas-induced climate change is impacting water.

Your film illustrates how in some parts of the world, the public water supply is now controlled by corporations. What's wrong with privatization of water?

Barlow: When you have a demand that's growing exponentially, and a supply that's decreasing exponentially, then whoever makes the decisions around water suddenly becomes very important. Private corporations have decided that this is more important than oil. They're going to make more money and become more powerful owning and distributing water than they can from anything else. All of these [corporate] practices mean ... the poor of the world don't have access to [affordable] clean water.

The film raises an important question: Is water a commodity, like oil, or is it a common natural resource?

Barlow: That's the essential question, and until we get that straight in the world, we're going to continue to have these conflicts. And there are going to be [more] conflicts as the big superpowers seek new water sources outside their borders. There are conflicts, obviously, between the needs of humans and nature. We're taking more than our share. We argue that if you ask the question, 'Who owns water?' the answer is that nobody owns it. It belongs to the earth. It belongs to all species. It belongs to future generations. It's a public trust and a human right.

The World Bank says it's not a human right, it's a human need -- and therefore the private sector can provide this just as well as the public sector. However, we say that ... you can't deny somebody water because they can't pay for it. And we're working right now towards a covenant at the United Nations that would declare water a human right. My country, Canada, and your country, the United States, are both in opposition to this.

There's a place for [desalination and recycling] technology, and there's a place even for the private sector, but it will all have to fit into the larger twin goals of conservation and source protection on one hand, and justice and equity on the other. Those are the twin foundations of a water-secure future. There will be no human future on this planet unless we get our act together.

If we're facing a water crisis, how do we fix it?

Salina: If world leaders, the international finance institutions, the U.N. and other governmental organizations really wanted to solve the problems related to water, they would take immediate action at the national and international levels. We would see a U.N. treaty that guarantees people sufficient potable water. We would see the G8 nations step up and provide resources for the provision of water to the urban and rural poor.

If our own leaders were serious about solving problems, we would not allow corporations to discharge pollutants into our water sources. And if they were serious about solving water problems -- instead of spending billions on developing technologies that clean up pollution -- we would be using resources to prevent water pollution in the first place. It will take political will. It will also take efforts on our part as individuals and communities.

What do you hope your film accomplishes?

Salina: The film is a first step to bring some awareness. You plant the seed of awareness, then action can take place. People deeply, passionately care about their water. It's not like Americans don't care. But they need to have the tools [to get involved]. A year from now [we hope] that maybe people will look at water differently. It's coming, drop by drop. That's how we make change.