ATLANTA, Georgia (CNN) -- Larry Horsley loves that he doesn't buy much gas, even though he drives his '95 Chevy S-10 back and forth to work each day. 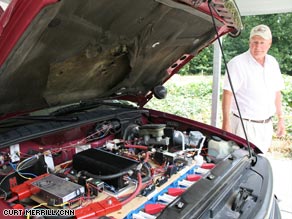 Larry Horsley's pickup has a set of neatly arranged electronics where his engine once was.

Horsley, a self-described do-it-yourselfer, simply plugs his truck into an electric wall outlet in his Douglasville, Georgia, garage and charges it overnight, instead of buying gasoline refined from mostly imported oil.

"If I can keep a dollar from going overseas, I'll spend two dollars," he said. The whole conversion, including the truck, cost him about $12,000, which parts dealers say is about standard.

Another Atlanta-area tinkerer, David Kennington, converted his Honda Civic del Sol from gasoline to electric for a different reason: "I'm a raging greenie," he said.

Both Horsley and Kennington are fed up. They're among a growing number of Americans who are refusing to wait for big-car manufacturers to deliver mainstream electric vehicles, called EVs. Not only have they rebelled against the status quo by ripping out their gas-guzzling engines and replacing them with zero-emission electric motors, they say just about anyone can do it.

Another electric DYI-er in Wolfeboro, New Hampshire, Bob Batson, has formed a company called Electric Vehicles of America that sells vehicle parts for other anti-gasoline rebels looking to convert.

Batson said business has more than tripled in the past year. "Sales trends are definitely up as the price of gasoline goes up," he said.

Outside his metal roofing business, Horsley opened up the hood of his converted Chevy truck to show how he did it.

How do the engines work? We explain »

The entire process is "basically straightforward," he said, after four months driving it on electric.

"Anyone who has basic mechanical skills can build one of these," Horsley said. "But it takes time," he said, about three months. Most of that period was spent waiting for the parts to be shipped.

He's got the motor of his maroon S-10 pickup set up to run on 20 six-volt batteries, the same kind used in golf carts. The motor connects to an existing manual transmission to propel the truck up to 60 mph.

Horsley removed the vehicle's radiator to make room under the hood for a few of the batteries. The rest are concealed in the back, under the pickup's bed.

Other components such as a fuel injector were replaced with their electric counterparts and some, like the exhaust system, were removed completely.

Horsley started the conversion amid cool temperatures in January, so he didn't install air conditioning. But in August, sweltering in Georgia's brutal 90-degree heat and humidity, Horsley calls that decision a mistake -- one he won't make next time.

He said his wife won't let him convert her car, but he's looking for another used truck to convert.

The truck can travel about 40 miles without damaging the lead-acid batteries before the vehicle needs recharging, Horsley said. But he said 40 miles is enough to get to and from work and run errands around town.

While limited range is the main disadvantage of electric vehicles, most people don't need to drive very far on a regular basis, said Batson.

"What people don't always realize is that the average person only drives 20 miles per day," he said.

For his part, Kennington describes his sports-car red Honda as a "science experiment." He first converted the two-seater into an electric vehicle four years ago and has been tinkering with it ever since. He's swapped out components and tried multiple battery configurations.

With his current nine-battery setup Kennington gets about 20 miles per charge, so he only drives it on short trips a couple times a week from his Austell, Georgia, home.

"I did it for the learning experience," he said.

Kennington said he's waiting for better battery technologies, like nickel-metal-hydride and lithium-ion, to become more affordable. Those batteries can provide more power with less weight for increased range, but currently cost $10,000 to $20,000 per set, compared with about $2,000 for lead acid batteries, he said.

"I hope at some point that I will be able to drive it on a more regular basis and that it will be more useful," he said. "Do I expect it to someday to be my only car? No."

He said most people who own electric cars also have a gasoline or hybrid vehicle for longer trips.

Kennington is president of the EV Club of the South, a group of electric vehicle owners and enthusiasts. He said interest in EVs is directly tied to gas prices.

Horsley estimated that he has saved $700 since switching to electric four months ago. He's quick to point out that that's just the savings on gas. He also doesn't have to pay for oil or filter changes, since there is no engine oil or fuel filters to change.

"I was originally skeptical," he said. "But now I'm convinced."

All About Electric Vehicles • Gas Prices