FORT WORTH, Texas (CNN) -- Imagine a sun-swept Texas afternoon in 2015. After the roar of a ceremonial flyover, a Texas Motor Speedway crowd of 200,000 rises to its feet in anticipation of NASCAR's signature moment. 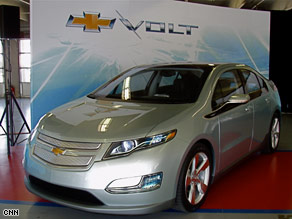 Chevrolet may have a challenge in marketing its Chevrolet Volt -- an electric car -- to NASCAR fans.

The celeb du jour grabs the microphone and bellows, "Gentlemen, start your engines!"

As the fans join in a full-throated cheer, 43 of the world's best drivers reach down and press a button. What follows is unprecedented: pin-dropping silence, save for 43 small clicks.

This scenario isn't as unfathomable as it may seem. In fact, in a sport whose fans often wear their American pride on their sleeves along with the image of their favorite driver, it may offer a strongly pro-American vision of the future.

NASCAR, meet the Chevrolet Volt, which General Motors believes will become the first mass-produced plug-in electric car on American roads by late 2010. The latest symbol of GM's new mantra, "From gas-friendly to gas-free," the Volt was unveiled to the media last week at Texas Motor Speedway, in the heart of NASCAR country.

Electric cars, with their quiet engines, turning laps in silence every Sunday on the NASCAR circuit? It may be a tough sell.

"Fans would pack up their Budweiser and leave," said Mike Nichols, a Dallas resident and NASCAR fan.

Other racing enthusiasts were more welcoming.

"Just as long as it's fast as heck and it's good racing," said Jim Mero, a record-setting Corvette Driver and Chevy engineer, "everything will be OK."

At last week's media event, which was closed to the public, a silver Volt prototype sat mere feet from a fleet of GM's current models. Everything from Chevy's iconic ZR1 Corvette to its hydrogen fuel-cell version of the Equinox sport-utility vehicle was on display. The car that gave the media the biggest charge, however, was the Volt.

In a country saddled with spiking gas prices and increasing gas shortages, the Volt is seen by some as a potential savior. Engine-roaring, oil-dripping NASCAR, however, has historically resisted change. Only last year did NASCAR convert to unleaded fuel, and its cars still contain another relic of the past: a carburetor.

Chevrolet understands that marketing the Volt, which was announced in 2007, might be a balancing act between blue- and red-state America.

"We are attracting the 'green' crowd and the 'tech' crowd," explained Cristi Landy, the Volt's product marketing manager. "But this car has mass appeal to a broader audience."

GM hopes that NASCAR fans, who tend to be staunchly patriotic, will appreciate that electric cars will probably reduce America's reliance on foreign oil -- especially on oil from nations that might be hostile toward the United States.

"Yes, we get it, and with fervor," said John Frost, a 60-year old NASCAR fan from Davidsonville, Maryland. "We are for the elimination of U.S. dependency on foreign oil. We're no dummies."

Still, don't look for Chevrolet to necessarily trot out the American flag in the marketing plan.

"There is a fear that if we position this as a 'pro-American' car, it will upset some of the environmentally conscious crowd," explained Pete Lewis, who works in program operations at GM. "And we want it to be embraced by everyone."

The Volt is expected to travel 40 miles on a single charge from a wall socket before an engine kicks in to generate electrical power. GM also promises a top speed of about 100 mph and a zero-to-60 time of roughly 9 seconds, specs that won't impress NASCAR fans used to seeing race cars roaring past at 200 mph.

"NASCAR is a total body experience," Frost said. "The sound of 750 horsepower times 43 cars -- lots of gas guzzling, internal combustion, unbridled horsepower. There's nothing like it. No matter what they do, they can never replace the thunder that is NASCAR."

In the end, selling a gearless Volt to NASCAR gearheads may come down to one basic question: Is the car fun?

"If you sit behind the wheel," said GM fuel-cell expert Mark Vann, "it's pretty cool."

"We feel that this is a superior solution versus what other competitors have done with hybrids. This car [offers] an electric performance," added Landy, conveying both the literal and metaphorical meanings of the word. "It will give you great off-the-line torque and a lot of low-end torque. It really. . .will be exciting to drive."

All About NASCAR Racing • Electric Vehicles