(CNN) -- The diminutive Derartu Tulu -- she stands only 1.56 meters (5 feet 2 inches) tall -- is one of, if not the greatest-ever female runners, the only woman ever to have won a long-distance gold at two separate Olympics. 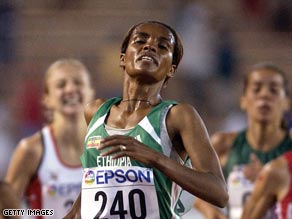 Two Olympic 10,000-meter victories have made Tulu an Ethiopian icon.

Born, like so many great athletes, in the highlands of Ethiopia, a member of the Oromo tribe, she grew up tending cattle on the family farm, and was not even aware that she was an especially fast runner until she started taking part in athletics competitions in her teens.

In the final, however, she came a disappointing eighth, leading many pundits to dismiss her chances of success at the following year's Barcelona Olympics.

They couldn't have been more wrong. In one of the most thrilling 10,000-meter races of all time Tulu overtook South Africa's Elana Meyer just before the bell, running the final lap in 64 seconds to win by 30 meters, in the process becoming the first ever black African woman to win Olympic gold.

The race over, she waited at the line for Meyer, a white south African, the two women embracing before joining hands and setting off on an emotional lap of honor together draped in their respective national flags, a gesture that seemed to symbolize hope for a new Africa.

Defending her title four years later in Atlanta she could only manage fourth place.

At the 2000 Sydney Games, however, she made a triumphant return, overtaking her compatriot Gete Wami at the bell and sprinting the final 400 meters in an astounding 60 seconds to win in 30 minutes 17.49 seconds, a new African and Olympic record.

Her victory made her the first woman ever to win two Olympic long-distance gold medals, and cemented her place as an Ethiopian national icon alongside fellow running legend Haile Gebreselassie (Addis Ababa city council subsequently named a school in her honor).

Although her mantle has, in recent years, passed to Britain's Paul Radcliffe, her place in the pantheon of athletic greats remains assured.

She has a six year-old daughter, Tsion.