Commentary: Growing up in the world of 'The Wire'

(CNN) -- I finally said goodbye to some old buddies. 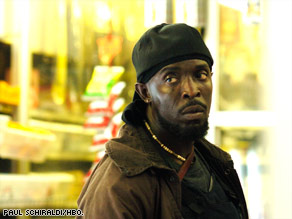 Omar (played by Michael K. Williams), "The Wire's" legendary stickup artist, hunts for a rival with his shotgun.

One of them shot a woman at point-blank range after complimenting her on her hair. Another person maimed a rival with his shotgun. A third stole from his sister to finance his drug habit.

Their names are as twisted as their deeds: Snot-Boogie, Bubbles, Dukie. And if I ever introduced you to them, you probably wouldn't be able to understand them. Their talk is filled with a bruising street poetry that's hard to decipher unless you've lived in their West Baltimore neighborhood -- as I once did.

My "friends" are some of my favorite characters on the HBO series, "The Wire." HBO (which, like CNN, is a Time Warner division) released the complete, five-season box set two weeks ago. The show focuses on a detective unit's quest to take down a ruthless drug crew, but it grapples with bigger themes: the collapse of public schools, the disintegration of working-class America and political corruption.

Critics say "The Wire" offers the most realistic depiction of America's inner-city subculture ever seen. I decided to test that claim because I grew up in the West Baltimore community where "The Wire" is set. After watching all five seasons, my take on the show is ambivalent.

Some of "The Wire" is real, but not in the ways you might expect.

'How do I get from here to the rest of the world?'

"The Wire's" most unsettling scene for me took place in season four. It involved a murder -- of a gentle teenager's spirit. The character's name is Dukie, and he brought back memories of some people I knew.

Dukie is lost. He has no family, his public school is paralyzed by violence and he's not tough enough to make it on the streets. He has a gift for computers but doesn't know what to do with his ability.

Dukie looks one day for help from "Cutty," an ex-con who runs a boxing gym in their neighborhood. Cutty tells Dukie that "the world is bigger" than the violent neighborhood both live in.

"How do I get from here to the rest of the world?" Dukie asks Cutty.

"I wish I knew," Cutty sighs, and walks away.

Why did Cutty give Dukie such a hopeless answer? Maybe it's because some people who never lived in a neighborhood like "The Wire" confuse hopelessness for authenticity. Yeah, I could shock you with stories of violence, but it's so easy to slip from revelation to titillation. I start off telling you a story about how tough my school was, and soon I'm shooting it out with five drug dealers who want to steal my homework.

But I never remember West Baltimore being so hopeless. A man like Cutty wouldn't tell a young man that he had no way out -- adults rallied around kids with potential.

I even checked with some childhood friends -- one who is now an undercover police officer who literally works a "wire" for the Baltimore Police Department -- and we all agreed that "The Wire's" bleakness was exaggerated.

"They made it seem like we grew up in Bosnia," my friend, another "Wire" fan, told me.

Perhaps I had the luck of timing, or, to paraphrase one "Wire" character, I left just before "the game got more fierce."

I'm 44. I grew up on a street connecting two notorious Baltimore landmarks -- North Avenue and Frederick Douglass High School. Douglass is a school so bleak that PBS recently aired a documentary on its dismal state. North Avenue is known for its liquor stories and shootings. I left my neighborhood for good in the 1980s before crack cocaine really hit.

Still, I shared some of the same struggles as some "Wire" characters. I spent much of my childhood in the equivalent of foster homes. I never really knew my mother. My father was an on-and-off-again presence.

But my community was filled with what Barack Obama calls the "quiet heroes." (Obama reportedly is a big fan of "The Wire.") There was my high school tennis coach. The dignified deacons in my church. The retired steelworker who watched Orioles baseball games on his porch next door. Relatives, teachers, even summer job programs (one gave me my first exposure to journalism) -- all inspired me.

Yet those quiet heroes seem fated to fail in "The Wire." The show implies that only a fantastic few ever escape the streets.

What Cutty could have told Dukie

Despite my misgivings, I love "The Wire." The dialogue crackles, the characters are rich and the minute ways it captures how Baltimoreans move and talk is uncanny. But the "Complete" story isn't the whole story.

"The Wire" did, however, nail one childhood memory for me.

The most realistic moment in "The Wire" for me didn't take place during any violent showdown. It took place in a steakhouse. The scene involved a "Wire" character called "Bunny" Colvin, a major in the Baltimore Police Department.

Colvin helps run an experimental program for problem students at a local high school. One night, he decides to take three of a school's most disruptive students to a steakhouse in downtown Baltimore. The kids are loud and brash, but they're petrified when they have to sit down in a fancy restaurant filled with white people. They can't function and end up leaving the restaurant, still hungry and angry.

When I was asked in high school to join an academic team that would compete on television against elite, white high schools in Baltimore, I said no. When I attended my first year in college, I wouldn't speak in class and stopped going because I was so intimidated being around people who could actually speak proper English. I almost flunked out. I felt like an imposter.

Sometimes, it's not enough to give kids who come from a world like "The Wire" the chance to get out. They also have to be convinced that they deserve it.

I almost sabotaged myself because I wanted to go back to what was familiar. Even though the familiar was depressing, it was all I knew. Now I know something different because a lot of people convinced me that I deserved to be in that other world.

I wish Cutty would have done the same for Dukie. I wish he would have told him he would find a way from "here to the rest of the world."

I hope the real-life Dukies know that. They deserve a chance to say goodbye to that world, too.