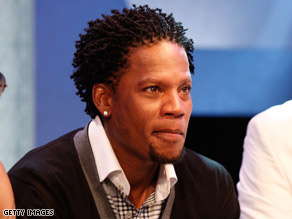 D.L. Hughley starred in "The Hughleys" and "The Original Kings of Comedy."

CNN announced Wednesday that it will premiere a new, "unconventional" weekend show hosted by comedian D.L. Hughley. "D.L. Hughley Breaks the News," as the show is currently titled, will feature Hughley's humorous take on the week's events.

It will also include interviews with newsmakers and reporters, according to the network. "D.L. Hughley Breaks the News" is scheduled to debut Saturday, October 25.

"I am very excited for the opportunity to work with the network that I have watched for a very long time, and that to a large extent, has shaped my comedic view," Hughley said in a press release. "CNN offers the perfect blend of news and information on a local, national and international level. What more can a comedian ask for?"

"D.L. is a news junkie who is bursting with things to say about what is going on in the world -- most of them funny, all of them thoughtful, none of them predictable," said Jon Klein, president of CNN/U.S. "When you watch as much news as our audience does, there comes a time you just want to stop and laugh -- and that time will be Saturday nights at 10 on CNN."

The show will resemble the late-night talk shows of Jay Leno and David Letterman more than Jon Stewart's "Daily Show," according to Hughley.

Hughley is known for his acting and his standup performances. The comedian spent four seasons on his own sitcom, "The Hughleys," and was one of the stars of Aaron "West Wing" Sorkin's series, "Studio 60 on the Sunset Strip."

The performer was also one of the "Original Kings of Comedy," along with Bernie Mac, Steve Harvey and Cedric the Entertainer.

CNN and CNN.com are units of Time Warner.