NEW YORK (CNN) -- With strong sales and equally powerful praise, the July issue of Italian Vogue can be judged a resounding success. 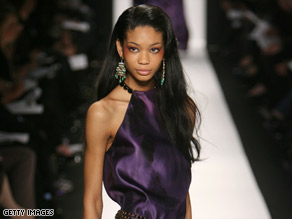 Chanel Iman is one of several models of color featured in the "Black Issue" of Italian Vogue.

Dubbed the "Black Issue," the magazine celebrates models of color from the past and present, including Donyale Luna, Liya Kebede, Naomi Campbell, Iman and Chanel Iman.

Within 72 hours, the magazine sold out in the United States and Great Britain. Blog posts and e-mails about the beauty and historical significance of the issue began to flow -- and industry insiders were equally pleased.

Praising renowned photographer Steven Meisel, who shot most of the issue's fashion pictures, The New York Times fashion critic Cathy Horyn gushed, "I think they are some of the best he's done. ... They are crazily, softly beautiful, plainly the work of someone who knows women and fashion."

See what all the fuss is about »

Another 40,000 copies of the "Black Issue" were recently reprinted to meet the still strong demand.

But will the all the hoopla translate into tangible change for black models in the fashion industry? Will more color be seen on the runway and in magazines? Many observers have their fingers crossed.

"All the agents were happy about the issue because it gives us hope that other people will catch on and decide that it's OK to use more black girls," said Carlos Ojeda, an agent at New York Models. "It's OK to have more than just one, and she doesn't have to always be Naomi."

"Italian Vogue is very influential around the world on an artistic level," said Constance White, style director at eBay. "That is the book that all the art directors, the photographers, any fashion editor looking for inspiration turns to ... and always has. It has always been the trendsetter, so hopefully people will look at it and say using black models is both relevant and right and will start doing it too."

Bethann Hardison, a legendary model agent-manager, said she has noticed a shift in the industry since she began holding town hall meetings last September to address the lack of diversity in fashion. The packed-to-the-rafters events quickly became the talk of the industry, and Hardison is widely credited with sparking the current movement.

"I started seeing more black models on the runway back in February," she said, pointing to the shows of designers like Diane Von Furstenberg and Michael Kors as examples. "I have already seen change, and I know that I will continue to see change."

Not all are nearly as optimistic, and fear the diversity issue will become as passe as the skinny-model debate of a few years ago.

"I hate to sound cynical, but by January, I feel like it will be back to business as usual," Ojeda said. "I want to be hopeful and positive, but a part of me does not want to get my hopes up."

"Let's see if Italian Vogue is going to be able to live up to the standards that they've now set," added one prominent New York-based stylist. "You can't have an issue with all black girls, pat yourself on the back and say 'that's it for the year.' "

Hardison is working hard to make sure that doesn't happen. She's already scheduled another town hall meeting for September, and she's also planning a mixer to introduce fledgling models of color to industry players.

"We just have to keep the bar high," Hardison said, "and keep showing beautiful women and pictures."

Lola Ogunnaike is the entertainment correspondent for CNN's American Morning.