BEVERLY HILLS, California (CNN) -- Here's what happens when you go to interview Aretha Franklin: Her publicist will e-mail the cell phone number of her security man to your BlackBerry. Once you reach the lobby of the Four Seasons in Beverly Hills, you call the cell phone. Someone will come down to get you and bring you up to her suite, where you'll be greeted by Carlton, her longtime makeup artist. 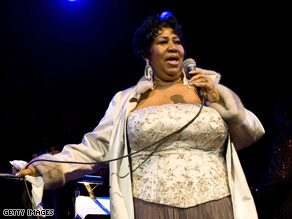 Aretha Franklin was voted the No. 1 singer of all time in a Rolling Stone survey.

Then you look around, and you notice Aretha -- the Queen of Soul and recipient of 18 Grammys -- is quietly padding around the room in jeans, a turquoise T-shirt and flip-flops. She'll offer you "a seat and Cokes" -- then proceed to shoot the breeze, while you and your camera crew invade her room to set up for the interview.

Then it hits you. You may be an Aretha Franklin groupie, but Aretha is a groupie of CNN.

She loves to talk politics, and she's up-to-the-minute in terms of information. President-elect Barack Obama is her man. After seeing his keynote address at the Democratic National Convention in 2004, she invited him to be her honored guest at an event in her hometown of Detroit, Michigan. He couldn't come, but she's been a loyal supporter since then. She'll sing at his inauguration in January.

In the meantime, Rolling Stone magazine, in a poll of music industry heavyweights, just named her the No. 1 singer of all time. And there's her new holiday album, "This Christmas, Aretha." In a career that's spanned more than 50 years, it's the first seasonal CD she's ever made.

Aretha helps us set the stage for Santa (eggnog optional).

Aretha Franklin: The snow is lightly falling -- you get the picture -- you're by the fireside with your sweetie, and no Aretha! There's no Aretha in the music! What's going on?! So I had to do an album.

CNN: You've been wanting to do a holiday album for a long time.

CNN: On "This Christmas, Aretha," there are some traditional songs and some more contemporary tunes.

Franklin: We did "Silent Night," "Angels We Have Heard on High," "14 Angels" -- which comes from the classic "Hansel and Gretel," the opera. What else did we do? "This Christmas" by Donny Hathaway and "Christmas Ain't Christmas (Without The One You Love)" by the O'Jays. Those two are my favorites. They're the first two records that are going to play in the Franklin household every Christmas.

CNN: What was Christmas like for you growing up?

Franklin: Christmases past, my sister, Carolyn, and I -- we'd been waiting for Santa all night. Nothing! Where is this man? And we're looking all up in the sky all night long, until I guess about 1 or 2 o'clock in the morning. Finally, we just fell out. We couldn't take it anymore. [We'd wake up in the morning and] come downstairs, and everything was under the tree! We couldn't believe it! Where did these things come from? You know, we just couldn't believe it.

CNN: Did you believe in Santa Claus for a long time?

Franklin: For a while, I did. And then I started getting the idea that it wasn't Santa -- it was Dad.

CNN: What's Christmas like now? Do you cook, or do you have someone help you cook?

Franklin: Oh absolutely, puh-leeze! Nobody else better cook on the holidays except me! I do everything -- the traditional fare. You have the turkey, the baked ham with the brown sugar glaze. We have the mixed greens, we have fried corn, we have the sweet potato pies, you have the potato salad -- the whole nine yards is on the table. Everything is from scratch. Men don't like eating out of cans. And I don't like eating out of cans too much, either.

CNN: Have you ever done a cookbook?

CNN: Do you gather 'round the piano and sing Christmas carols?

Franklin: After dinner, we do. We sing a little bit. We might be playing cards, we might be playing Monopoly. The children are just running in and out of the rooms, and up and down the steps. They love the workout room.

CNN: How many people do you generally have over?

Franklin: Usually, about 15 or so. My neighbors, my friends and family. My nieces, my grandchildren.

CNN: On election night, I hear you all got together to watch the presidential returns.

Franklin: We had an Obama pajama party -- and it was really cool -- at one of the casinos in Detroit. We sat there and watched the returns. Started at 6 o'clock, and we had like three or four screens going -- and, of course, we had CNN going, and I'm not just sayin' that because I'm sitting here. At that magic moment, the room just erupted. It was like, "Whoa!" All of the screaming and just -- I can imagine what people thought outside in the hallways!

CNN: Did you ever think you'd see a black man elected president in your lifetime?

Franklin: Absolutely. Absolutely, I did, yes -- after Reverend [Jesse] Jackson made his run, and Shirley Chisholm, so long before. I thought maybe even Colin Powell might run after Reverend Jackson. I did.

CNN: Do you already have your dress for the inauguration?

Franklin: Honey, I've had my dress for months!

CNN: I hope you have a hotel reservation -- otherwise, you'll be begging for a bed at a youth hostel.

Franklin: Oh, no. I don't stay at those places.

CNN: You want a job in Barack's Cabinet?

All About Aretha Franklin