Editor's Warning: This report is about the rapper Nas and his controversial album. It contains language you may find offensive, including the n-word, which was originally the title of the album. Since this story is about his use of the word in his songs but not on his album, should you continue reading, we must warn you that we have included the word in the story. 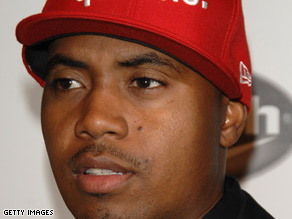 Nas, 34, says he thinks he can still deliver his message without naming his album what he originally intended.

(CNN) -- When Nas said he didn't name his album "Nigger" because there might be problems getting it into stores, it was no surprise. But when he said pressure from black leaders played a role, it seemed out of character.

The Queens-reared rapper has never been one to kowtow. Just last month, he referred to the Rev. Jesse Jackson as "the biggest player hater" and declared Jackson's time as a voice for black America over.

But in a recent CNN interview, Nasir Jones explained he didn't change the album's name to please the Rev. Al Sharpton and other black leaders. Rather, they were stealing his thunder.

"I don't think I liked the attention I was getting from some of the elders in my community," he said. "I saw it kind of leaning toward being about them ... only about them. I kind of wanted to just shake that off of me."

His remedy? To drop the title altogether -- literally. The album, out Wednesday, has no name. But don't think Nas is cowering from controversy -- the cover features the rapper shirtless with his iconic, gothic "N" digitally whipped into his back.

With a host of racial issues -- the Jena Six, Don Imus, nooses -- fresh on America's mind, naming an album "Nigger" seems ill-advised. Nas, however, said his goal wasn't to upset; it was to upend a society that focuses more on pejoratives than the racial plights that spawn them.

"There's still so much wrong in the whole world with people -- poor people, people of color -- I just felt like a nice watch couldn't take that away, make me forget about that. A nice day on a yacht with rich friends couldn't make me forget about reality, what's going on," he said. "That's why I named the album that -- not just that the word is horrible, but the history behind the word, and how it relates to me, how it's affected me, offended me."

Harvard law professor Randall Kennedy delves into the frustrating duality of the slur in his 2003 bestseller, "Nigger: The Strange Career of a Troublesome Word." Since colonist John Rolfe first coined "negar," referring in 1619 to a shipment of Africans to Virginia, the epithet has lived a largely opprobrious life, with one exception, Kennedy writes.

"Currently, some people insist upon distinguishing nigger -- which they see as exclusively an insult -- from nigga, which they view as a term capable of signaling friendly salutation," Kennedy writes.

Kennedy, who is black, concludes his book expressing satisfaction that the word's use causes anxiety. Politicians should avoid uttering it at all costs, he writes, and uses by nonblacks is most often a no-no.

But never underestimate the word's complexities, says Kennedy: "For bad and for good, nigger is thus destined to remain with us for many years to come -- a reminder of the ironies and the dilemmas, the tragedies and glories, of the American experience."

Kennedy declined to comment for this story, and Sharpton's press office did not respond to an e-mail and voice message requesting an interview.

Because Nas rescinded the title doesn't mean the multiplatinum rapper isn't prepared to engage in debate on the word's merit in today's lexicon.

"It's all about the intent and what you mean and how it's coming off and the reason why you're saying it. You know, if it's ill intent, if you're angry, being ignorant, being meanspirited, saying that word -- it means the worst," he explained. "If you're just a couple of black guys on the street corner, doesn't mean it's a great thing, but it's not that they're trying to harm each other when they say it."

As for a wholesale ban on the word -- something Jackson and Sharpton have suggested -- Nas scoffed.

"For some people, you should never be able to use it," he said. "For others, it's way too late. It's too late to try to stop using it. It's something that's just part of the language now."

That "elders" had anything to do with changing the album's name might be a sign the 34-year-old is continuing the personal growth so easily charted since he released his 1994 debut, "Illmatic," an album that would help earn him the No. 5 spot on MTV's list of the top MCs of all time.

Back then, Nas was a 20-year-old, street-hustling rhymesmith from the rough-and-tumble Queensbridge projects, on the brink of earning the admiration of some of hip-hop's biggest names.

After "Illmatic," fans watched Nas -- and his ego -- grow through the years as he proclaimed himself "Nastradamus," "God's Son" and the "Street's Disciple."

His legions watched him become jaded with age when, in 2006, he declared, "Hip Hop is Dead," and lashed out at the rappers and DJs he felt had rendered the genre hackneyed.

Though Nas dabbled in advocacy before Wednesday, his lyrics dwelled more on his rhyming skills, hot sneakers, women and blunts. Violence was regularly invoked, especially in regard to any would-be dissers.

On the untitled album, there's still an air of militancy, with the threats of violence directed toward those who aim to oppress African-Americans.

He boasts likenesses to Black Panther founder Huey P. Newton and threatens to throw Molotov cocktails in the name of civil rights murder victim Emmett Till.

On "Testify," Nas warns that he's loading a magazine to "send these redneck bigots some death in a bag/choke him out with his Confederate flag/I know these devils are mad."

"I really like 'Testify' because it's like a man who's just frustrated and doesn't know how to fight. It's when you feel like there's no one to call. Who do you call when you're of the ethnic group that the police have been wiping out for years and the government doesn't do anything?" Nas asked.

Nas explains his growth on "Project Roach," crediting a Guyanese anthropologist and literary critic with helping him mature: "I used to worship a certain Queens police murderer/Till I read the words of Ivan Van Sertima/He inserted something in me than made me feel worthier/Now I spit revolution, I'm his hood interpreter."

Other messages on the album seem designed to inspire the black community, or to decry a separate-but-equal culture that purports to incubate fairness but rarely produces results.

On "America," he opines, "Too many rappers, athletes and actors/But not enough niggas in NASA/Who gives you the latest dances, trends and fashion?/But when it comes to residuals they look past us."

Nas acknowledged he's a different person today than when he dropped "Illmatic," and his music has grown along with him. Fans should recognize and enjoy the evolution rather than make comparisons, he said.

He tentatively agreed that his untitled album addresses the plight of black America with a more positive voice, but he almost bristled when asked if he was a "conscious rapper," guys like Common, Mos Def and Talib Kweli who largely refrain from talk of violence and misogyny.

Nas, he said, will remain an individual, an artist, a lyricist, whose style and message can't be placed in a tidy case like one of his albums.

All About Nas (Rapper) • Al Sharpton