LONDON, England (CNN) -- From an animated documentary detailing one man's efforts to regain his memories of being a young soldier in "Waltz with Bashir" to Christopher Nolan's box office behemoth "The Dark Knight," movies in 2008 have been notable for their creativity, diversity and international flavor. 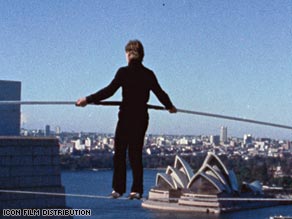 "Man on Wire" looks back at Frenchman Philippe Petit who, in the 1970s, set a wire between New York's Twin Towers and walked the tightrope across it.

As well as featuring films from the U.S., our list contains the work of directors from Brazil, Korea, Argentina, Italy, the UK and Israel.

There are documentaries and animations in there, as well as a very impressive comeback from Mickey Rourke in Darren Aronofsky's "The Wrestler" and a jaw-dropping documentary about a French man who walked the tightrope between the World Trade Center's twin towers in New York, which were destroyed in 2001.

As ever, it is impossible to fit every film we would like to on this list, and we want to hear from YOU -- what were your favorite films of 2008? Tell us in the SoundOff box below.

Fei Phoon contributed to this article.