(CNN) -- Van Johnson, whose boyish looks and earnest manner made him a Hollywood heartthrob in the 1940s and '50s, died Friday in an assisted-care facility, a friend told CNN. 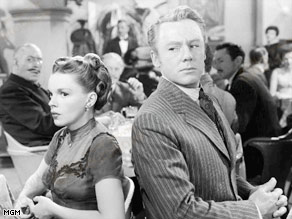 Van Johnson and Judy Garland in "In the Good Old Summertime," one of many musicals in his lengthy career.

Johnson, 92, died around 11 a.m. of natural causes at the Tappan Zee Manor in Nyack, New York, where he had lived for seven years, said Wendy Bleiweiss.

Johnson's career stretched over six decades and across genres, from comedies and war films, such as "The Caine Mutiny" and "30 Seconds Over Tokyo," to Broadway musicals and television shows, including a guest spot as the Minstrel on the campy 1960s series, "Batman," according to Turner Classic Movies' Web site.

The red-haired, freckle-faced actor's youthful charm earned him a huge teen following in his heyday. He became known as the "voiceless Sinatra," despite a singing voice that landed him roles alongside June Allyson and Judy Garland in "Two Girls and a Sailor" and "In the Good Old Summertime," according to TCM.com.

Johnson was born August 25, 1916, to a plumber and housewife in Newport, Rhode Island. He was 16 years old when he left Rhode Island for New York City so he could forge a career in acting, Bleiweiss said.

A few years later, he got his break from Lucille Ball, she said.

"She saw this redhead kid and said, 'Let's give him a break. He seems like he can do some acting,' " Bleiweiss said.

Johnson made his Broadway debut in 1936 in "New Faces of 1936" before legendary director-playwright George Abbott hired him as a chorus member and understudy to the three male leads in Rodgers and Hart's "Too Many Girls" in 1939.

The next year, Abbott cast him as a chorus boy and Gene Kelly's understudy in Rodgers and Hart's groundbreaking musical "Pal Joey," according to TCM.com. His film debut followed in 1940 with a role in the chorus of "Too Many Girls."

While en route to a screening in 1942, he was in a car wreck that left him with a metal plate in his head and kept him out of the military. But that didn't stop him from acting in war films.

Two years later, he received top billing in "Two Girls and a Sailor." Other big roles included "A Guy Named Joe," "Brigadoon" and "The Caine Mutiny."

In 1947, Johnson married former actor Eve Lynn Johnson, who had previously been married to a close friend of Johnson's, Keenan Wynn. The two did not have children and divorced in 1968, according to TCM.com

Johnson had a daughter, Schuyler Van Johnson, by another woman, according to TCM.com.

As Johnson entered middle age, his features grew heavy but he still managed to find offbeat roles in films including "The Bottom of the Bottle," an unabashed melodrama in which he played an alcoholic, and "23 Paces to Baker Street" as a blind detective.

As film roles became scarce, Johnson filled the gaps with stage work. He appeared in "The Music Man" in London, England, in 1961 and returned to Broadway in 1962 for "Come on Strong."

In Woody Allen's 1985 comedy, "The Purple Rose of Cairo," Johnson played one of the actors trapped inside the film screen in a parody of sorts of films from the 1930s.

In 1987, Johnson was praised for his work in the Broadway production of "La Cage aux Folles." He last appeared on stage four years ago in "Love Letters" in a community theater in nearby Suffern, New York, but decided afterward that he would do no more, Bleiweiss said.

"He said he had seen it and done it all and now he was just going to sit back and take it easy. Those were his words," she said.

Johnson retained much of his youthful energy as he grew older, and became a frequent interview subject on the old days of Hollywood and his lengthy career, TCM.com said.

Bleiweiss said she met Johnson when he moved into the home, where she was a case manager at the time.

"He still was tall and striking," she said. "He was one of the all-time old actors."

His ability to communicate was hampered by the loss of his hearing. Instead, he passed the time by painting, needlepoint and crocheting, she said.

Though he didn't cook, he loved watching cooking shows and reruns of "The Golden Girls," she said.

Bleiweiss said Johnson was estranged from his daughter and stepchildren for most of his life, but children brightened his day.

"When he saw them, he'd smile and wave to them," she said. "It always brought a smile to his face."

A private service will be held.