'Mad Men' star's hair is 'bane of my existence'

LOS ANGELES, California (CNN) -- Jon Hamm has a confession to make: He hates his hair. 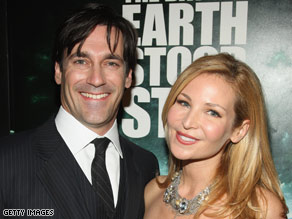 Jon Hamm poses with his partner, Jennifer Westfeldt, at the premiere of "The Day the Earth Stood Still."

That may come as a surprise to fans of the actor, whose slick-backed hair is part of his signature look on "Mad Men" -- the show that just earned him another Golden Globe nomination for best actor in a TV drama.

In the new movie "The Day the Earth Stood Still," Hamm sports a slightly different 'do, with his bangs combed rakishly over one eye. It was in the context of promoting the sci-fi remake that Hamm revealed his tonsorial frustration.

"It's the bane of my existence. Goofy hair," he said in a self-deprecating interview with CNN. "It never looks good ... It's a pain."

Hamm says he's always worn his hair long, but had to cut it for AMC's TV series, in which he plays a 1960s Madison Avenue ad executive. He says stylists on the show, armed with hair spray and blow dryers, mold his coiffure into a hard shell. Helmet hair has come in handy at work.

Whether it's his hair, good looks, acting chops or a combination thereof, Hamm's star is on the rise in Hollywood. Apart from his co-starring role in "The Day the Earth Stood Still," Hamm recently completed work on the murder mystery "The Boy in the Box." He hosted "Saturday Night Live" this fall, he's due to play Tina Fey's love interest on "30 Rock" and he continues to receive accolades for his work on "Mad Men" (nominations for an Emmy and a Golden Globe so far).

How does that make Hamm feel?