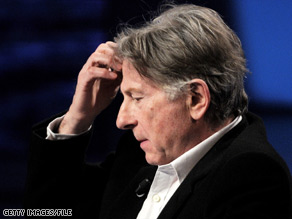 Roman Polanski is an Oscar-winning director for his Holocaust drama, "The Pianist."

Polanski's defense team offers what it calls "extraordinary new evidence" of "repeated, unlawful, and unethical misconduct" by the Los Angeles District Attorney's Office and the judge in Polanski's case based on details that surfaced this year in an HBO documentary.

"We are looking forward to seeing Mr. Polanski in court as the matter is litigated," said Sandi Gibbons, a spokeswoman for the district attorney's office. She said the office had only heard of the motion through media reports and declined to comment further.

Polanski, 75, has chosen to live in exile since fleeing the United States in 1978 after pleading guilty to having sex with a 13-year-old girl. An arrest warrant against him remains in effect.

According to the document filed Tuesday, the HBO film, "Roman Polanski: Wanted and Desired," reveals that a deputy district attorney at the time, David Wells, engaged in "unethical and unlawful" conversations with the late Judge Lawrence Rittenband.

Rittenband was "illegally influenced" by Wells, and ignored the terms of Polanski's plea agreement, which required considering counsel argument before deciding on a sentence, the document says. Instead, Rittenband sentenced Polanski to prison, even though the chief prosecutor, a probation officer and the girl's family had recommended the contrary.

Polanski failed to show up for sentencing and never returned to the United States.

"I'm not surprised that he left under those circumstances," says prosecutor Roger Gunson in his interview for the documentary, which is noted in the court document.

The director, a native of Poland who lives in France, has continued to direct films. In 2003, his Holocaust drama "The Pianist" won the Academy Award.