(CNN) -- As a comedic sidekick, Brian Fantana in "Anchorman" was golden -- the clueless ladies' man who sex-panthered his way into fans' hearts. 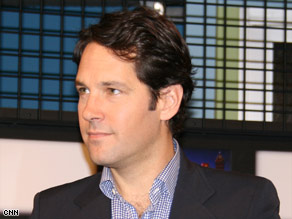 Paul Rudd stars as Danny Donahue in "Role Models," which he helped write.

Some might say the same about the man who played Fantana, Paul Rudd, although this talented actor didn't need a secret cologne for his trip to stardom.

From "Anchorman" to "The 40-Year-Old Virgin" to "Knocked Up," Rudd has consistently played a hilarious second string. But he's no longer just comedic backup in Hollywood.

In his new movie "Role Models," which opens November 7, Rudd and Seann William Scott star as a pair of energy drink representatives who end up with a choice: jail time or 150 community service hours in a local mentoring program. As it turns out, the jail time might have been less painful.

CNN talked to Rudd about the movie -- which he helped write -- how he chooses his roles and what he was like as a child. The following is an edited version of that interview.

CNN: What attracts you to the roles you choose?

Paul Rudd: Well, you know, 99 percent of the time I just say I want to do it if I'd want to see it. A lot depends on the people that are involved and if I feel there's something I can connect with a character in some way.

I kind of decided a long time ago that I was going to try to make a career work on my own terms as much as possible. I mean, you know you don't always have the options you'd like, but I just decided however long or bumpy the route was, I would do it doing things that I liked and was genuinely interested in and wanted to do.

CNN: Have there been any characters in particular that have been your favorite or you've felt you really connected with?

Rudd: There have been many that I've really liked. Brian Fantana in "Anchorman" was a blast, just really, really fun. "Role Models" is the one that's coming out that was really, really enriching and fun and personal in many ways, because it's the first movie I co-wrote.

I've been really lucky to have enjoyed the experiences as much as I have, working on movies, because it's not always the case. You never know how they're going to turn out, but if they actually mean something to me -- if I think there's something in it that's genuinely interesting to me -- they've, so far, turned out pretty well.

CNN: Can you tell me about the process of writing "Role Models"?

Rudd: It had been around for a while in different forms, this film. I thought that the premise was really, really funny, and the script was funny, but there were certain things that were being changed. In talking with the producer, she wanted to know what was working and what wasn't working ... and I was hired to be one of the writers.

So I rewrote it, and then David Wain, who is the director, he came on board, and then he and I worked on it together with another guy named Ken Marino, who is also a friend of mine. It was really fun to work with friends, and it turned into a hybrid of a movie that's unique and funny and absurd.

It's a commercial film, but for people who are familiar with David Wain's style -- which is a very specific kind of left-of-center approach and not so, I think, commercially appealing -- it's a kind of a weird marriage that works well.

[Wain, a member of the comedy troupe the State, directed and co-wrote "Wet Hot American Summer."]

It is a commercial film, but there are some jokes in it that you just don't see in commercial movies. It's got elements of a family film, but it's way darker than a family film. It's a hard R, bizarre family adventure. I don't know how exactly to describe it.

CNN: I have to ask, what was it like working with "McLovin" (Christopher Mintz-Plasse from "Superbad"), who plays your mentor child in the movie?

Rudd: It was pretty great. That kid is seriously smart and funny. It blows my mind how much his life changed in the course of a couple years. We didn't necessarily write that part for Chris. I imagined that role to be younger, but he's so good and kind of so perfect for it. And he liked it and was into the idea of doing it, so that's how that happened.

CNN: Is he as geeky in real life?

Rudd: No, the thing is, this is why he's so good; this is what impressed me about him. He knows what he's doing. Michael Cera is like this, too. I'm shocked at the kind of self-awareness of these kids, and they're 18 and really talented. [They] know how to deliver a joke and don't ham it up.

CNN: This movie is all about role models, and as an actor, you are a role model to many people. What do you think the most important qualities of a role model are?

Rudd: To be an actual role model? Oh, God, I would hesitate to say we should be anybody's role models. Your role models are your parents.

But, I always think a good rule of thumb is to treat people the way you'd like to be treated; let the rest take care of itself. You know, try to be nice to people, I suppose, and to treat people with respect and be polite.

But I haven't figured out nearly enough stuff to be an effective role model.

CNN: Do you have any personal role models?

Rudd: You know who's a good role model? Paul Newman. I just think he's an example of somebody who came into this world, and left this world, as a contributor in ways that are so huge. Even though the world has a lot of problems in it, it is better off by a mile for Paul Newman having lived in it. He gave more than he got. He got a lot, but he gave way, way more.

CNN: Do you do any volunteering yourself?

Rudd: I try, and I do, but I want to start doing more. It sounds so lame to say "I want to start," but I'm in the process to start setting up a foundation. And I do work with certain charitable organizations and I'm on the board of a couple. It's a daunting task for sure, but there are some things you just kind of have to make the time for.

Rudd: I had a pretty happy childhood. I loved goofing around in any way, shape or form. I loved speech classes and making videos and comedy stuff. I loved football.

I was into being a kid. I didn't necessarily want to grow up. I remember that a lot of kids my age wanted to get older, and I think I knew as a kid that it was going to get harder.

All About Paul Rudd • Movies