'Knight's' Bale: Who is that masked man?

(CNN) -- He armors himself, keeps other people guessing and likes to wear a mask. 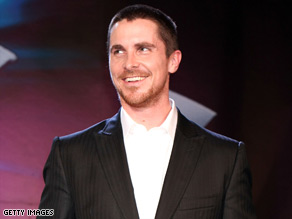 Christian Bale is known as a hard worker who immerses himself in his characters.

Though in his case the armor and mask are metaphorical, the 34-year-old "Dark Knight" star likes to keep his personal life as shadowy as a superhero's back story. He's been known to keep a low profile -- "You will never see me at a party," he told the Times of London -- and delights in concocting stories about his life.

"I make up [things]," he told Details magazine earlier this year. "Absolutely. I'm an actor -- I'm not a politician. I always kick myself when I talk too much about family, or personal things. I'll enjoy chatting now and then later I'll regret it."

But with the explosive impact of "The Dark Knight" -- the film has set box office records in the 10 days since its release, becoming the fastest film to reach the $300 million mark in history -- and the forthcoming release of the fourth "Terminator," which will star Bale, he may find his privacy limited. ("The Dark Knight" is a Warner Bros. film. The studio, like CNN, is a unit of Time Warner.)

"Can he stand the glare of the spotlight?" a rival studio executive asked Entertainment Weekly. "Being put in major roles and major films?"

Already there are signs that Bale has made the jump from actor to movie star. Last week, news of an alleged hotel-room tussle between the actor, his mother and his sister made headlines around the world. Bale, who has denied the allegations, described the incident as "a deeply personal matter" and asked the media to "respect my privacy in the matter" at a press conference.

Watch the latest on the incident »

In general, he's been successful at making sure his personal matters are off-limits. Though willing to do interviews about his films -- the Internet is filled with them -- he usually sticks to talking about their production and his performances, reluctant to bring up his personal life.

A few facts are well established: Christian Bale was born January 30, 1974, in Wales. His father, a former RAF pilot, once served as a film double for John Wayne; his mother was a one-time circus performer. (After divorcing his mother, Bale's father later married women's-rights advocate Gloria Steinem.) The family moved often, with Bale estimating he lived in 15 different places in his first 15 years.

He started his acting career while still a child. He received his first acting break appearing opposite Rowan Atkinson ("Mr. Bean") in the London stage show "The Nerd" in 1984, followed by two British TV miniseries. At 12 he was plucked from 4,000 hopefuls to star in Steven Spielberg's 1987 film "Empire of the Sun." (According to the Times of London, he was recommended by Spielberg's then wife, Amy Irving.) Even then he disliked dealing with the press: he abruptly walked out of a Paris press conference for "Empire" while promoting the film.

"Empire" was followed by an eclectic filmography: Kenneth Branagh's Shakespeare adaptation "Henry V" (1989); the musical "Newsies" (1992); the historical drama "Swing Kids" (1993); and the 1994 version of "Little Women," which made him a sex symbol to a group of "Baleheads." (He was one of the first stars to have a fan site devoted to him.)

Through the latter, he also met his future wife, Sandra Blazic, a onetime assistant to "Little Women" star Winona Ryder. The two have been married for eight years, and have a 3-year-old daughter.

By the late '90s, he was acting in a number of independent films, including "Metroland" (1997), based on a Julian Barnes novel about London yuppies; "Velvet Goldmine" (1998), the Todd Haynes film that starred Ewan McGregor and Jonathan Rhys Meyers as early-'70s rockers; and, most infamously, "American Psycho" (2000), based on the controversial Bret Easton Ellis novel about a vicious serial killer who hides behind a bland investment banker persona. iReport.com: Your thoughts on 'Dark Knight'

Bale has said he was more affected by trying to get the "Psycho" part than the role itself. He was strung along -- the studio wanted Leonardo DiCaprio, who was slated for it but walked after contract negotiations broke down -- and put a number of projects on hold while hoping the role would come through. But making the movie, which was given an NC-17 rating by the ratings board for its (often implied) violence and sex -- was fairly easy, he told Entertainment Weekly in 2000.

"I can't say I felt queasy once making this movie. ... I slept really well," he told the magazine. "I played Jesus in this TV thing [NBC's 'Mary, Mother of Jesus'] after doing 'American Psycho' -- I had nightmares the whole time, like I haven't had since I was 10 years old. ... But ['Psycho' character] Patrick Bateman? Nothing."

Since "American Psycho," Bale has become as known for his work ethic as his performances. He dropped 60 pounds for "The Machinist," about a blue-collar worker afflicted with insomnia, and then bulked up again for "Batman Begins," his first go-round at the Batman role. He played a disturbed military veteran in "Harsh Times" (2006), investing the role with such intensity that he shocked director David Ayer, and ate worms in "Rescue Dawn," which he made for the equally intense director Werner Herzog. He changes his natural English accent for each role, to the extent of doing publicity in his character's voice.

He's said on many occasions that he tries many roles for "the experience."

But it's "The Dark Knight" that has everybody buzzing. In interviews for the movie, Bale has been eager to shine the spotlight on his fellow cast members, notably the late Heath Ledger and co-star Michael Caine, and even his stunt double.

Watch Bale talk about the film and Ledger »

But director Christopher Nolan -- who's now directed Bale in three films (the two Batmans and "The Prestige") -- says the actor deserves praise in his own right.

"I knew I wanted to work with him when I saw him in 'American Psycho,' " he told USA Today. "You have to be extremely talented to take that kind of absurd violence and make it funny. That's what I wanted for Batman, too."

With "The Dark Knight" earning raves and raking in money, Bale would seem to have his pick of future roles. He loves working with Nolan -- he's intimated that he'd sign on for "Batman 3" if Nolan's on board -- and doesn't seem to care if the role is for a small-scale indie or a big-budget summer blockbuster.

But give people a bigger glimpse of Christian Bale? That's not going to happen if he can help it.

Indeed, he takes pride in his anonymity. He told Details of two incidents -- one in which an agent didn't recognize him, another with a casting director who confused him with Christian Slater -- that encouraged him, and told the Los Angeles Times he will continue to make things up to entertain himself during endless movie junkets: "I have no desire for people to get their facts right about me," he said.

What finally matters, he told the Minneapolis Star-Tribune while promoting "The Prestige" (a film in which he convincingly played a magician), is the work. Acting, he pointed out, has its blessings.

"We're fortunate that it's easy for us to disappear inside our characters," he said.