(CNN) -- She is only 37 years old, but violinist Midori Goto has already spent 25 years taking center-stage with the world's best orchestras. 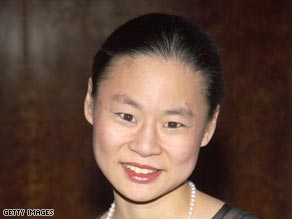 Midori first hit center-stage when she was just 11-years-old.

Born into a musical family in Osaka, Japan, in 1971 -- her mother and brother are both accomplished musicians -- her own prodigious talents were spotted at an early age by Zubin Mehta, the conductor and one-time musical director of the New York Philharmonic.

Inviting Midori to play with the New York Philharmonic in 1982, he helped to propel her onto the world stage which has been such a large part of her life ever since. She moved to New York to study at the Juilliard School of performing arts and has lead a life entwined with music.

Unlike some prodigiously talented people there is no hint of resentment directed toward her and the life she has led. Nor is there any notion of a stolen childhood, despite her admission that she did harbor dreams of being all sorts of other things, from an archeologist or diplomat to a zookeeper or a nun.

"This was my life, I didn't know any other. I took it and I was very happy. Being a child performer opened up opportunities. From a fairly early age I was exposed to different cultures and was traveling round the world. It was a great education," she told CNN.

Being given the opportunity to learn more about different people and experience different places was only one part of this education.

While Midori has been practicing and honing her own skills, she has also been given the opportunity to give something back. In 1992 she set up Midori & Friends, a non-profit organization that brings musical education to young people in New York City.

"I was always interested in education; not just receiving, but also helping others and being part of the community," she said.

While continuing to perform across the world with renowned orchestras she took some time out to further her own education with a degree in psychology in 2000 and in 2005 received her Masters in Psychology from New York University.

But music is and remains her first love and the way in which it connects people and stirs emotions is something she believes is one of the most powerful aspects of music.

The world today might be unrecognizable from the world of Bruckner or Bach, but for Midori the way people feel and respond to music and emotions remains the same.

"The very basics of being human hasn't changed. We may express ourselves differently, but the fact we do respond and do feel that is something very basic," she said.

And while there are hardships involved in being one of the world's finest violinists, it still remains a pure pleasure.

"As musicians we're trained to be self critical so we can get better. But fundamentally we love music. It's a love that drives us to practice and keep working at it. It's something I love so much and gives me so much joy.

"With that comes hardships... there's never a state of perfection. You try and you try and you try, but at the end you know you can't be perfect. It's humbling, so that it becomes a motivating force," she told CNN.

Continuing her work outside of the concert hall, Midori was made a UN Ambassador for Peace in 2007, a role she relishes.

While it presents her additional opportunities to talk about issues close to her heart, it's also a position that nourishes her inquisitive mind and another means to connect with people indirectly through her music.

These experiences make the world a little more vivid than it was before. And I'm grateful for that; it's also something that motivates me to continue to do it," she said.

All About Classical Music