(CNN) -- The transgendered woman on the other end of the line was threatening to kill herself by jumping off of a parking structure. The Trevor Helpline counselor who answered the phone worked to get the 24-year-old calm and immediately called police for help. 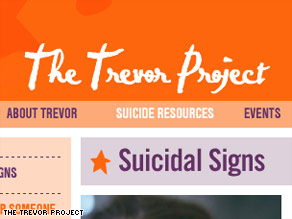 The Trevor Project online provides resources for educators and a list of suicide warning signs.

Exactly one month later, that same woman called the helpline back -- to thank them for saving her life.

Stories like these are the reason The Trevor Project operates its helpline, the only nationwide, around-the-clock crisis and suicide prevention number for gay and questioning youth. More than 500 volunteers are trained for 40 hours to run the bicoastal call centers.

"There's a high level of stress that youth face in the transition from youth to adulthood," Charles Robbins, executive director of The Trevor Project, said. "Add on top of that the challenges of sexual orientation or gender identity and we get 15,000 calls a year."

A 2005 Massachusetts Department of Education survey of 3,500 high school students, in partnership with the Centers for Disease Control and Prevention, found almost 11 percent have seriously considered suicide. And that percentage is almost four times as high for 10 to 24-year-olds who identify themselves as gay, lesbian or bisexual.

"Because of the unfortunate stigma that still exists in the United States around homosexuality ... youth tend to hold back their feelings, don't disclose, live in denial or shame," Robbins said.

The Trevor Project began in 1998, named after the short film "Trevor" that won an Academy Award in 1994. To encourage open discussions about suicide, personal identity and sexual orientation, the organization created The Trevor Survival Kit. The kit includes the DVD of "Trevor" and a classroom teaching guide.

"All of these resources are helpful and necessary for gay and questioning youth because it's important for them to understand that they are not alone, that there is a safe place for them to find someone to listen, and most importantly, that their lives are valuable," Jacqueline Wing, communications manager for The Trevor Project, wrote in an email.

For more information on The Trevor Project, or to see a list of suicide warning signs, visit www.thetrevorproject.org. To contact the helpline, call 1-866-488-7386 or (866) 4.U.TREVOR.

All About GLBT Issues • Suicide