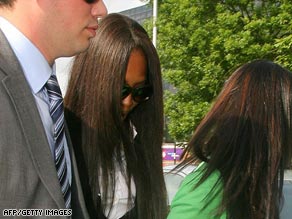 Naomi Campbell, seen here arriving at court, was convicted of an assault charge in New York in 2007.

According to the British Press Association, the 38-year-old pleaded guilty at Uxbridge magistrates' court, west London to two counts of assaulting a police officer, one count of disorderly conduct likely to cause harassment, alarm or distress and using threatening, abusive words or behaviour to cabin crew.

Prosecutors described how Campbell kicked and spat at police, used foul language and accused airline personnel of racism after she was told that one of her bags had not been placed on the British Airways flight to Los Angeles on 3 April.

The London-born model was also ordered to pay $400 to each of the police officers she attacked and $300 to Miles Sutherland, the captain of the British Airways plane she disrupted, in addition to a $4,600 fine.

Chairman of the magistrates' Peter Yiacoumi said he had given Campbell credit for her guilty pleas and previous good character.

He said: "These offences are aggravated because they were committed within a lengthy incident in a confined space on an aircraft. Whilst we accept that the loss of your suitcase would have been stressful your subsequent behaviour cannot be justified."

A spokeswoman for British Airways told PA Friday: "We take all cases of disruptive behaviour extremely seriously and take action where appropriate.

"We have banned people from travelling with us in the past and we reserve the right to ban passengers."

BA would not comment specifically on the Campbell case, but it is understood that the supermodel has been banned by the airline.

In 2007, a New York court handed Campbell a community service sentence and ordered her to attend anger management classes as punishment for hitting her maid on the head with a mobile phone.

The London-born model had been arrested a year previously after hurling the phone -- reportedly a jewel-encrusted BlackBerry -- which smacked her housekeeper on the head, leaving her needing four stitches. She pleaded guilty to a charge of reckless assault.