(CNN) -- A candidate for the Republican National Committee chairmanship said Friday the CD he sent committee members for Christmas -- which included a song titled "Barack the Magic Negro" -- was clearly intended as a joke. 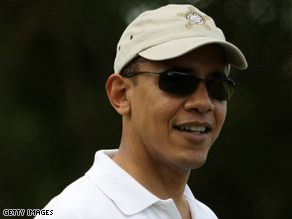 The title of the song about President-elect Barack Obama was drawn from a Los Angeles Times column.

"I think most people recognize political satire when they see it," Tennessee Republican Chip Saltsman told CNN. "I think RNC members understand that."

The song, set to the tune of "Puff the Magic Dragon," was first played on conservative political commentator Rush Limbaugh's radio show in 2007.

Its title was drawn from a Los Angeles Times column that suggested President-elect Barack Obama appealed to those who feel guilty about the nation's history of mistreatment of African-Americans. Saltsman said the song, penned by his longtime friend Paul Shanklin, should be easily recognized as satire directed at the Times.

The CD sent to RNC members, first reported by The Hill on Friday, is titled "We Hate the USA" and also includes songs referencing former presidential candidate John Edwards and the Rev. Jeremiah Wright, among other targets.

According to The Hill, other song titles, some of which were in bold font, were: "John Edwards' Poverty Tour," "Wright place, wrong pastor," "Love Client #9," "Ivory and Ebony" and "The Star Spanglish Banner."

Saltsman was national campaign manager for former Arkansas Gov. Mike Huckabee's presidential bid in 2007 and 2008. Before that, he held a variety of posts, including a number of positions under former Sen. Bill Frist of Tennessee.