Commentary: Give bankers some of their own medicine

By Douglas Rediker
Special to CNN

Editor's note: Douglas Rediker is co-director of the Global Strategic Finance Initiative at the New America Foundation. A former investment banker, he spent 16 years in Europe as a banker and private equity investor for several investment banks, including Salomon Brothers, Merrill Lynch and Lehman Brothers. The New America Foundation is a nonprofit institute that says it seeks "new thinkers and new ideas to address the next generation of challenges facing the United States." 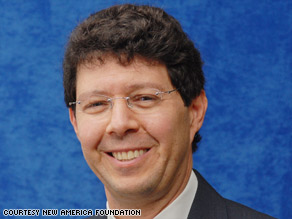 Douglas Rediker says it's good for investment bankers to share in the toxic assets they packaged and sold.

Bonus time is when all the deals you crafted and all the money you made for the bank gets toted up and you get your fair share.

Usually, in the world of Wall Street and its international counterparts, that "fair share" can reach 10 or 15 times your annual salary. That usually makes year-end a time of great joy in investment banking land.

But this year is different. This is the year when dodgy mortgages, which had been packaged together, securitized and thus magically transformed into "ultrasafe" securities, blew up. That led to the collapse of so many of the deals bankers had crafted (and got paid for) in past years. Many banks disappeared or were merged out of existence.

Thousands of jobs were lost, and retirement nest eggs, made up largely of stock received at previous bonus times, dramatically declined in value -- many to the point of worthlessness.

This year is different because many CEOs have agreed to forgo bonuses entirely, and other investment bankers who still have jobs will awaken to find that coal in a Christmas stocking looks good by comparison.

That's because one of the world's largest financial institutions, Credit Suisse, just announced that it would pay its bankers up to 80 percent of their 2008 year-end bonuses in the form of what The Wall Street Journal called "an illiquid group of junk bonds, mortgage-backed securities and corporate loans" instead of cash or stock, as had been the norm throughout the industry.

CS effectively told its bankers that this year, instead of getting paid money, they would get paid in kind -- the same kind of over-leveraged, securitized paper that caused much of the crisis in the first place.

This is a fabulous idea. Not only does it help the bank's balance sheet by moving these toxic assets off their books and onto those of its employees, but it serves as an unambiguous reminder to those whose job it is to create and sell financial products in the markets that this isn't a game of smoke and mirrors.

Securities actually have to have value, and those who create and sell them can't just walk away after the wreckage and claim that it's somebody else's problem. It imposes the discipline that if you are selling a deal to your clients, you should be willing to invest in it yourself. Those who created, traded and sold securities defined by words like "junk" or "toxic" now own them. A lot of them.

Perhaps it will make those who structure products and deals think a little differently in the future. It's one thing if you think that your job is just to sell something. It's another if you know you will have to live with the consequences yourself.

Many bankers at Credit Suisse are, not surprisingly, livid, the Journal reported. At a time when they are stretched for cash, bankers -- especially those in unrelated fields like mergers and acquisitions, equities and research -- are saying they had nothing to do with creating this problem, so they shouldn't now have to own them.

But for the past five years, the majority of banking revenues and profits came from these structured products, which greatly increased the broad bonus pool -- which is how everyone in the business got paid. When past bonuses increased by millions year over year, there was nary a peep from those same bankers who now say the current scheme is unfair.

There's every reason to believe that the value of these illiquid assets will increase over time. Some investment bankers have said that the current standard of "mark-to-market" accounting values these assets only at whatever people are currently willing to pay for them -- and thus often at too low a price.

They say that there is far more upside than down for these securities once some sense of normalcy returns to the markets. But, for investment bankers, it is one thing to argue that to your clients, regulators and shareholders. It may be quite another when you have to explain it to your spouse.

I have long advocated a code of professional responsibility for the investment banking business, along the lines of what lawyers agree to in return for their license to practice law. I imagine a code that requires bankers to adopt principles that impose basic obligations, such as, "I will never sell something that I would never be willing to own myself."

While I still believe that we need a code, it appears that the market may have already moved more quickly than the regulators to achieve the same goal. At least in the case of Credit Suisse, I think a lot of bankers will now think twice about deals and products they create and advocate, if they believe they may end up owning them themselves at the end of the day.

The opinions expressed in this commentary are solely those of Douglas Rediker.

All About Home Financing • Financial Markets