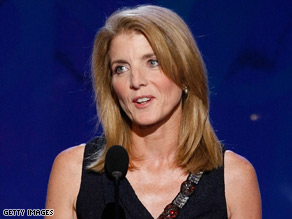 Caroline Kennedy has her eyes on the New York Senate seat.

He indicated that 12 people were interested in the position.

"She's interested in the position," New York Gov. David Paterson confirmed. But at the same time "she realizes it's not a campaign." Paterson, who will name Clinton's successor, noted that Kennedy had indicated a desire to "sit down and tell me what her qualifications are."

The Rev. Al Sharpton also released a statement Monday indicating that he had received a call from Kennedy "who expressed to me her interest in [Clinton's] Senate seat."

Background: The Kennendys in Politics »

Her uncle Ted Kennedy has represented Massachusetts in the Senate since 1963, and her uncle Robert Kennedy served as New York's junior senator from 1965 until he was assassinated in 1968.

"Remember, [Clinton's] seat in the Senate was once held by Robert Kennedy," said Bill Schneider, CNN's senior political analyst. "[Caroline Kennedy's] other uncle, Ted Kennedy, is ill right now. If Paterson appoints Caroline Kennedy to the Senate, it means there could be a Kennedy staying in the Senate for quite a long time."

CNN reported earlier this month that Caroline Kennedy had called Paterson to discuss the possibility of taking the seat.

Paterson has the power to appoint a replacement, who will then face a special election in 2010 to fill out Clinton's term. Paterson confirmed to CNN last week that Kennedy had called and "asked a few questions" about the expected vacancy.

One Democratic source close to the Kennedy family told CNN earlier this month Kennedy was "interested to say the least" in the Senate seat and had asked a tight circle of other family friends and political advisers for advice.

Before this year, Kennedy generally limited her forays into the public sphere to nonpartisan activity, penning books on civil liberties and serving as the de facto guardian of her father's legacy.

But in January, she backed a political candidate for the first time, announcing her endorsement of Obama during the Democratic primary season with an op-ed in The New York Times that drew days of the kind of media attention she has spent her life avoiding.

"Apparently, she has acquired a taste for politics," Schneider noted. "She wants to be part of this new regime in America, clearly playing a key role in the Senate if she gets that appointment."

There are a slew of high-profile candidates for Clinton's Senate seat, including New York Attorney General Andrew Cuomo, whose last name carries some star power of its own New York, where his father was once governor.

Caroline Kennedy has also spent most of her life in the city, working there after graduating from Harvard, meeting her husband, Edwin Schlossberg, on the job at the Metropolitan Museum of Art, and attending Columbia Law School there.

Her most prominent public roles involved overseeing her father's presidential library and presenting the annual Profiles in Courage Award.

She's also edited several books, from a volume of children's poetry and an updated edition of her father's book "Profiles in Courage" to a collection of patriotic verse ("A Patriot's Handbook: Songs, Poems, Stories, and Speeches Celebrating the Land We Love").

Most of her leadership positions have been based in the arts: serving as host of the annual nationally televised Kennedy Center Honors in Washington and serving as the honorary chairwoman of the American Ballet Theatre, as her mother did.

In late spring and early summer she was mentioned as a possible vice-presidential candidate and more recently as a contender for secretary of education in an Obama Cabinet. But elected office would mark a major shift for Kennedy.

In a 2002 Time magazine interview promoting the updated "Profiles in Courage," Kennedy would not rule out the possibility of a run for public office.

All About Caroline Kennedy