(CNN) -- November 27 may be Turkey Day in America, but in the world of politics, every day is turkey day. 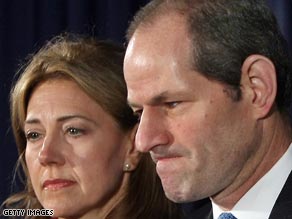 Former New York Gov. Eliot Spitzer earned his Turkey of the Year recognition for his involvement in a prostitution ring.

Turkeys are foolish creatures -- overstuffed, noisy and self-important. A lot like the politicians on our list of Turkeys of the Year.

Turkey No. 10: Rudy Giuliani puts all his eggs in one basket -- Florida.

"We are going to win in Florida, and then we will be talking about exactly who made the right decisions," Giuliani says on CNN's "The Situation Room" a week before the primary.

Giuliani ends up third in Florida, with 15 percent of the vote.

The former New York City mayor was relying on the many former New Yorkers who have moved or retired to Florida. There's just one problem: most of them are Democrats, and Democrats can't vote in Florida's Republican primaries.

Watch what made these turkeys memorable »

Turkey No. 9: In 2006, Tim Mahoney defeated Florida Rep. Mark Foley after it was revealed that Foley had sent sexually suggestive messages to congressional pages. Mahoney's campaign demanded an investigation.

This year, Rep. Mahoney again called for an investigation -- this time by the House ethics committee into his own behavior, after it was reported that he had paid off a staffer to avoid a sexual harassment lawsuit.

Mahoney later admitted to "multiple affairs," including one with a local government official who had business with his office.

Mahoney lost his bid for re-election. But not everything was lost. "The irony is not lost on any of us,'" a senior Democratic operative observed.

Turkey No. 8: In June, Barack Obama addresses a meeting of Democratic governors in Chicago. His rostrum bears ... what is this? A presidential seal? Not quite.

The eagle looks familiar, but instead of a shield, there's the letter "O.'' The seal says,"Obama for America.'' And that Latin phrase, "Vero Possumus''? It means, "Yes, we can."

A little presumptuous, perhaps, four months before the election? "That was a one-time thing for a one-time event,'' Obama's campaign spokesman tells CNN.

Turkey No. 7: Sen. Elizabeth Dole runs a TV ad accusing her Democratic opponent of taking "godless money.'' The ad refers to "a secret fundraiser in Kay Hagan's honor'' co-hosted by an adviser to an atheist advocacy group. The ad shows a picture of Hagan while a woman's voice declares, "There is no God.'' The voice is not Hagan's.

"I am a Sunday school teacher,'' Hagan tells reporters in a conference call. "I am an elder at First Presbyterian Church in Greensboro. My family has been going to this church for over 100 years.''

Hagan files a lawsuit against Dole for defamation and libel. She subsequently defeats Dole in the North Carolina Senate race. And drops the lawsuit.

Turkey No. 6: Alaska Senator Ted Stevens, the king of pork, turns into a turkey. The longest serving Republican senator in history is convicted on seven felony charges of corruption for failing to disclose hundreds of thousands of dollars worth of gifts and free services.

John McCain, Alaska Gov. Sarah Palin and Senate Republican leader Mitch McConnell call on Stevens to step down. Stevens' response: "I am innocent.'' He tells Alaska voters that he "has not been convicted of anything.''

In a close race, Stevens narrowly loses his bid for re-election and becomes a symbol of corruption and arrogance in Washington.

Turkey No. 5: Not politicians this time, but arrogant auto executives who come to Washington looking for a bailout. In their private jets.

"I'm going to ask the three executives here to raise their hands if they flew here commercial," said Rep. Brad Sherman, D-California, adding "let the record show that no hand went up."

The AIG insurance company does get an $85 billion federal bailout. Whereupon 70 of their executives reward themselves with a weeklong spa retreat. The cost? A cool $440,000.

Turkey No. 4: After videos surface of the Rev. Jeremiah Wright's controversial sermons, Barack Obama delivers a major speech distancing himself from his pastor's sensational comments. Then Wright appears at the National Press Club to give his side of the story. He claims Obama "didn't denounce him'' but "did what politicians do.''

"I said to Barack Obama last year, 'If you get elected, November 5th, I'm coming after you because you'll be representing a government whose policies grind under people," Wright said.

Obama does get elected, and Wright keeps his word. "As long as you are presiding over policies that grind God's people into the earth, I'm coming after you," Wright threatens in a radio interview after the election.

Turkey No. 3: The financial crisis hits in mid-September, and John McCain declares, "The fundamentals of our economy are strong." The Republican nominee makes a startling announcement a few days before the first debate. McCain says, "Tomorrow morning I'll suspend my campaign and return to Washington."

Why? To rescue a federal bailout package for the financial industry. McCain goes to Washington and what happens? His own party kills the rescue package.

Turkey No. 2: "I have responded consistently to these tabloid allegations by saying I don't respond to these lies." That was John Edwards in July. But they were not all lies.

The next month, the former Democratic presidential candidate responds with a public confession of an extramarital affair. He explains his behavior as "a self-focus, an egotism, a narcissism, that leads you to believe that you can do whatever you want. You're invincible. And there will be no consequences."

Want another example of men being turkeys?

Turkey No. 1: New York governor -- make that, former governor -- Eliot Spitzer, who had to resign because of his involvement with a high-priced call-girl service.

"Over the course of my public life, I have insisted, I believe correctly, that people regardless of their position or power take responsibility for their conduct. I can and will ask no less of myself. For this reason, I am resigning from the office of governor," Spitzer said.

"To every New Yorker and to all those who believed in what I tried to stand for, I sincerely apologize,'' said the hard-charging, suddenly humbled ex-governor.

And with that, the turkey is served.

More turkey? We invite you to add turkeys of your own.

All About Eliot Spitzer • U.S. Politics