Volcker to head board of economic experts

(CNN) -- President-elect Barack Obama announced Wednesday that he is creating a new economic recovery board to provide a "fresh perspective" for his administration. 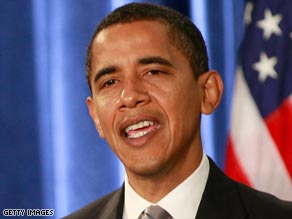 President-elect Barack Obama announces Wednesday that he is creating a new board of economic experts.

The board will be headed by Paul Volcker, who served as the chairman of the Federal Reserve from 1979 through 1987, serving under Presidents Carter and Reagan.

After his tenure there, Volcker worked in the private sector as an investment banker until 1996. Volcker also headed the investigation into the United Nations' oil-for-food program for Iraq.

"The reality is that sometimes policymaking in Washington can become a little bit too ingrown," Obama said at a news conference in Chicago, Illinois.

"The walls of the echo chamber can sometimes keep out fresh voices and new ways of thinking. ... This board will provide that perspective to me and my administration, with an infusion of ideas from across the country and from all sectors of our economy," he said.

Obama senior adviser Austan Goolsbee will be the chief economist on the board.

Watch Obama announce the creation of the board »

The board will advise Obama on how to revive the ailing economy, offering independent, nonpartisan information, analysis and advice to the president as he formulates and implements his plans for economic recovery, Obama's transition office said.

It will be established initially for a two-year term, after which Obama will determine whether to continue its existence, based on whether it's needed.

Obama said he would announce the rest of the board members in the coming weeks.

Those named to Obama's economic team have started work on crafting an economic recovery plan. The group also must figure out how best to allocate the rest of the $700 billion bailout that Congress passed in October.

Obama has said he hopes the new Congress will begin work on an aggressive economic recovery plan when it convenes in January, so his administration can immediately get to work. The president-elect said Tuesday that it is important that his administration not "stumble" into office but "hit the ground running."

Watch Obama talk about the need for budget reform »

An economic stimulus package is central to Obama's plan. He has declined to speculate on how big the stimulus would need to be, saying only that it has to be "large enough to jump-start the economy."

Responding to criticism that he was filling out his team by recycling the Clinton administration, Obama said Wednesday that he is looking to combine "experience with fresh thinking."

Obama said advice from his economic advisory board would be an example of a "cross section of opinion."

"We want ideas from everybody, but what I don't want to do is to somehow suggest that, because you served in the last Democratic administration, that you are somehow barred from serving again -- because we need people who are going to be able to hit the ground running," he said.

Several officials close to the transition tell CNN that a member of President Bush's administration, Defense Secretary Robert Gates, is expected to stay on the job for at least the first year of the new administration.

One source called it "all but a done deal" that the announcement could come as early as next week.

To some, the choice demonstrates bipartisanship and conveys that Obama has the self-confidence in his leadership abilities to keep one of the more widely respected members of the Bush administration. iReport.com: What do you think of Obama's cabinet picks?

"We've got confidence, continuity, and I still think the mission to get out of there as soon as possible will be accomplished. So I think it's a great choice," Democratic Rep. Charles Rangel said on CNN's "Larry King Live."

Others say keeping Gates could delay the change that Obama promised during his campaign by prompting potential policy conflicts over missile defense funding and a speedy Iraq pullout.

"If we don't have good civilian personnel alongside our good military personnel, we're not going to reform. It can't happen. You need the right people to make it work," former Pentagon comptroller Dov Zakheim said.

Sources close to the transition have said Obama is interested in some continuity at the Pentagon because he is entering office while dealing with two wars, in Iraq and Afghanistan, as well as the international financial crisis.

The president-elect has made no secret of his interest in having divergent views within his Cabinet, and Gates has served in various national security roles under Republican presidents, including as CIA director during former President George H.W. Bush's administration.

Gates would be joining a high-profile national security team that is also expected to include a retired four-star general.

Also Tuesday, the head of Obama's intelligence transition team said he is withdrawing his name from consideration for director of the CIA.

In a letter to Obama obtained by CNN, John Brennan cited strong criticism from people who associated his work at the CIA with controversial Bush administration policies on interrogation techniques and the war in Iraq.

Brennan defended himself against such accusations, saying, "The fact that I was not involved in the decision-making process for any of these controversial policies and actions has been ignored" by his critics.

A number of names have been floating around Washington as possible choices for CIA director. They include Rep. Jane Harman, D-California, who chaired the House Intelligence Committee; retiring Sen. Chuck Hagel, R-Nebraska, a member of the Senate Intelligence Committee; and Timothy Roemer, the former Democratic congressman from Indiana who served on both the congressional and the presidential September 11 commissions.