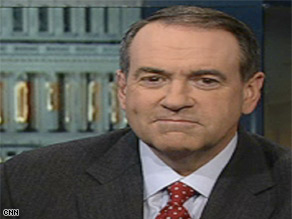 "I didn't dislike him," Huckabee told CNN's Wolf Blitzer in an interview on The Situation Room. "It was a matter of [Romney] taking positions on issues that he had never taken before and at the same time, he was bashing people like me who had been consistent in our own views."

Huckabee's book, released Tuesday, is critical of several Republicans he says are partly to blame for the party's across-the-board losses on Election Day, including Romney and Fred Thompson -- another former GOP presidential candidate.

In the book, Huckabee specifically takes aim at Romney for shifting positions on key conservative issues shortly before he decided to run for the White House, saying his record was "anything but conservative until he changed the light bulbs in his chandelier in time to run for president."

He also lashes out at Romney for what he said was the former governor's refusal to offer congratulations when Huckabee was the surprise winner of the crucial Iowa caucuses in January. Many political observers say it was that loss that ultimately derailed Romney's bid for the Oval office.

A spokesman for Romney called the comments petty.

Huckabee also takes aim at Thompson, the former senator and television actor who jumped into the Republican presidential race significantly later than the other candidates.

"Fred Thompson never did grasp the dynamics of the race or the country, and his amazingly lackluster campaign reflected just how disconnected he was with the people, despite the anticipation and expectation that greeted his candidacy," Huckabee writes.

But in the interview with CNN, Huckabee said his comments in the book were part of a larger narrative calling for change in the leadership ranks of the Republican Party.

"This book is not about what's wrong with Mitt Romney or anybody else," he said. "I try to tell it in the narrative of the campaign. This book says if we're going to try to hit the reset button on the Republican Party, move forward, bring us back together and really become a majority party again...we'd better change things."

Huckabee, who is now the host of a weekly television program and set to begin a stint on the radio next year, appears to already be positioning himself for another presidential bid in 2012 and already has a trip to Iowa planned as part of his 56-city book tour.

But the former Arkansas governor dodged questions about whether he is interested in making another run for the White House.

"There's a part of me that wants to see some fundamental change. I may not be the one to lead it," he said.

In the wide-ranging interview, Huckabee also suggested he would have run a different general election campaign than John McCain, specifically when it came to the Arizona senator's support of the massive economic bailout bill in late September.

McCain suspended his campaign to return to Washington in hopes of shepherding the $700 billion measure that the vast majority of conservatives opposed. The move appeared to upset many among the base of the Republican Party -- a constituency that was already wary of the Arizona senator.

"The last things Republicans wanted our Republicans to do is to vote to give taxpayer money to private industry," Huckabee said. "That's the most un-Republican thing I've heard of in my life."

"It hurt McCain badly," Huckabee said of the then-Republican presidential candidate's support of the bill. "It was a matter of conscience for him but it was definitely a hurtful thing, particularly among Republicans."

Huckabee also said the Republican Party must ultimately return to its basic fundamental beliefs if it hopes to be relevant again.

"We don't have any credibility if we say that we want to balance budgets and curtail spending and then we create these huge, humongous deficits that are going to be passed on to our grandchildren," he said.

"That's not only to me wrong, but it's irresponsible. Recklessly so."