WASHINGTON (CNN) -- More than 100 retired U.S. military leaders -- including the former head of the Naval Academy -- have signed a statement calling for an end to the military's "don't ask-don't tell" policy, according to a California-based think tank that supports the movement. 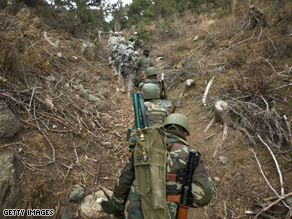 Retired Adm. Charles Larson, the former Naval Academy superintendent, tops the list of 104 retired general and admirals who want the government to repeal the policy, the Palm Center at the University of California, Santa Barbara, announced Monday.

"Don't ask-don't tell" was made law in 1993 after opposition ballooned to newly elected President Bill Clinton's plan to lift the military's complete ban on gay service members. The new policy stopped the practice of asking potential service members if they are gay but still required the dismissal of openly gay service members.

The Palm Center, which circulated the statement calling for the repeal of the "don't ask-don't tell" policy, is looking to President-elect Barack Obama to address the controversial issue of gays in the military.

The center points out that Larson, a four-star admiral who supported the measure in 1993, has changed his view on the policy. "There were a lot of witch hunts and a lot of people were turned out on that basis," he is quoted as saying in a Palm Center release.

In July, a House panel weighed overturning the military's "don't ask, don't tell" policy -- the first time Congress had considered the rule since it was implemented 15 years ago.

But Elaine Donnelly of the Center for Military Readiness said allowing gays to serve openly in the military would be disruptive.

"Such a policy would impose new, unneeded burdens of sexual tension on men and women serving in high pressure working conditions, far from home, that are unlike any occupation in the civilian world," Donnelly said.

Brian Jones, a retired sergeant major in the Army, also argued that allowing gays to serve publicly could hurt recruiting.

"Allowing homosexuality in the military would cause unnecessary sexual tension and disruptions to good order, morale, discipline and unit cohesion," Jones said. "This would erode the very qualities of military service that presently appeal to potential recruits."

Obama has said that as president, he would seek to repeal "don't ask-don't tell," but not by signing an executive order, as President Harry Truman did when he abolished segregation the armed services in 1948.

"I would not do it that way," he said in a September 16 interview with Philadelphia Gay News.

"The reason is because I want to make sure that when we reverse 'don't ask-don't tell,' it's gone through a process and we've built a consensus or at least a clarity of ... what my expectations are, so that it works."

"I believe that the way to do it is make sure that we are working through a process, getting the Joint Chiefs of Staff clear in terms of what our priorities are going to be. That's how we were able to integrate the armed services to get women more actively involved in the armed services.

"At some point, you've got to make a decision that that's the right thing to do, but you always want to make sure that you are doing it in a way that maintains our core mission in our military."

The group reported they found no evidence that the primary rationale for imposing the policy -- that openly gay or lesbian service members pose "an unacceptable risk" to morale and unit cohesion -- remains valid.

"While this may have been true in 1993, there are indications that this may no longer be the case," the report said.

"In 1993, the finding of 'unacceptable risk' was based on the views of currently serving service members and military leaders, and on the experiences of foreign militaries."

The report also noted the policy has forced out of the military some very talented personnel and put commanders in the position of breaking the law or damaging the unit's cohesion by forcing out "qualified, meritorious" service members.

A recent Washington Post/ABC News poll found that 75 percent of respondents supported allowing gays to serve openly in the military, up from 62 percent in 2001 and 44 percent in 1993.

To meet its goals of increasing numbers, the military has recruited thousands of convicted felons and illegal drug users under its "moral waivers" program, the report noted, while dismissing hundreds more for being gay.

The statement signed by Larson and other top brass reads:

"We -- the undersigned -- respectfully call for the repeal of the 'don't ask-don't tell' policy. Those of us endorsing this letter have dedicated our lives to defending the rights of our citizens to believe whatever they wish. Scholarly data shows there are approximately 1 million gay and lesbian veterans in the United States today as well as 65,000 gays and lesbians currently serving in our armed forces. They have served our nation honorably. We support the recent comments of former chairman of the Joint Chiefs, Gen. John Shalikashvili, who has concluded that repealing the 'don't ask-don't tell' policy would not harm and would indeed help our armed forces. As is the case with Great Britain, Israel and other nations that allow gays and lesbians to serve openly, our service members are professionals who are able to work together effectively despite differences in race, gender, religion and sexuality. Such collaboration reflects the strength and the best traditions of our democracy."