Can John Edwards make a comeback?

WASHINGTON (CNN) -- John Edwards took the stage at Indiana University on Tuesday night for a discussion on the 2008 presidential election, but members of the audience may have had something else on their minds entirely. 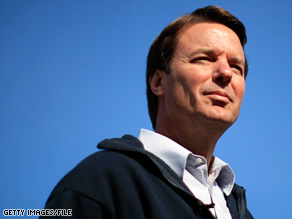 John Edwards admitted in August that he had an affair with Rielle Hunter in 2006.

After all, this is the former North Carolina senator's first public appearance since his admission of an extramarital affair sent shockwaves through the political world more than three months ago.

Edwards talked about politics, poverty and his hopes for America and the world, according to The Associated Press. Afterward, he answered only written questions that had been submitted before his speech. The affair wasn't mentioned, AP reported.

The revelation, confirming a months-long investigation by the National Enquirer, was a political bombshell for the former candidate, who espoused moral values during his White House bid and whose wife is fighting a public battle with breast cancer.

The acknowledgment, during an ABC News interview in early August, was carefully timed to coincide with the opening night of the Olympic Games for minimum impact, and Edwards effectively went into hiding immediately after.

During the interview, Edwards said he had engaged in an extramarital affair with a former campaign staffer, Rielle Hunter, but he vehemently denied he was the father of her newborn baby.

The man who had been considered a major contender for the Democratic nomination instantly became a pariah in his own party and didn't merit so much as a mention at the Democratic National Convention a month later.

But with the 2008 presidential election officially in the history books, Edwards may be looking to accomplish what a handful of other national political figures have been able to do: successfully re-emerge from an embarrassing public scandal that by all appearances has left his political career in ruins.

It remains unclear how successful the 2004 vice-presidential nominee will be in that pursuit, but Americans have given politicians second chances in the past.

Political opponents and members of the media have written off Bill Clinton on more than one occasion after embarrassing sex scandals, and many assumed Louisiana Sen. David Vitter's career was done after his involvement with a Washington escort last year.

"It's possible that so many officeholders have survived sexual scandals simply because the public has a low opinion of politicians," CNN polling director Keating Holland said. "They may not be surprised that politicians are cheating on their spouses and may be more likely to forgive behavior that they assume is happening anyway."

But for every politician that has survived a sex scandal, scores of once-powerful men have not. Just ask former Democratic presidential candidate Gary Hart, former Republican Rep. Bob Livingston, or Democratic Rep. Tim Mahoney, who lost his re-election bid last week after an affair with a former staffer was disclosed.

But Edwards' future just may hinge on how he goes about re-entering the public sphere. While it remains a long shot that Edwards will ever run for office again, he could re-emerge as a powerful voice for a set of issues he championed during the Democratic presidential primary: poverty and healthcare.

"He needs to figure out what the Democratic Party needs post-Obama election and step back and think, 'Well, what can I bring to the table?' " said James Spellman, a professor at George Washington University's Graduate School of Political Management. "It can't be all about him and his resurrection. It has to be about the benefits he can bring to helping the new administration and what he can do to help Obama and his team get the job done."

"Americans are very forgiving, and their memory is often short," Spellman said. "He can come back if he does it right."

The speech Tuesday night appears designed not to make a political splash -- no reporters or cameras are allowed in the room. But by all outward appearances, it is an attempt by Edwards to dip his foot back into the political waters after a three-month hiatus.

"Whatever he says, his speech is either going to be blogged or taped by people listening," Spellman said. "Social media technologies are such today that nothing is closed. Anytime you give a speech it's public."

Edwards is also set to make a public appearance in San Francisco, California, Wednesday -- and slated to debate former Bush strategist Karl Rove at the American Bankers Association, the San Francisco Chronicle reported over the weekend.

But even as Edwards is appearing to take the first steps toward a comeback, former supporters -- many of whom where blindsided by his admission of infidelity -- may be unwilling to give him a second chance this soon.

"I wish he would keep himself locked in a cave for a year," a former senior staffer to Edwards' campaign said. "The best strategy he could adopt right now is to stay below the radar and just be quiet and let people move on."

"Part of him wants to champion causes others have left behind, and there is a part of him that feels like his own personal mistakes should not sabotage the causes of poverty, but he is not the best messenger for that right now," the former senior staffer said.

All About John Edwards