CHICAGO, Illinois (CNN) -- President-elect Barack Obama called Nancy Reagan on Friday to apologize for a remark about seances he made during his first news conference earlier in the day. 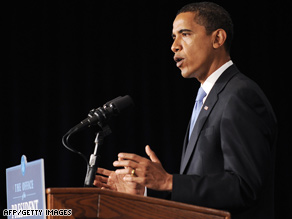 When a reporter asked Obama if he had spoken with any ex-presidents since his election on Tuesday, he responded that he had spoken to all former presidents "that are living."

"I didn't want to get into a Nancy Reagan thing about, you know, doing any seances," he said.

Nancy Reagan, wife of 40th President Ronald Reagan, was derided in 1988 when his former chief of staff Donald Regan revealed in a book that the first lady had consulted an astrologer to determine the president's schedule.

"The president-elect expressed his admiration and affection for Mrs. Reagan that so many Americans share and they had a warm conversation," Cutter said.

In his 1996 book, "The Choice," Washington Post editor and writer Bob Woodward said that as first lady, Sen. Hillary Clinton had seance-like sessions at the White House during which she conversed with late first lady Eleanor Roosevelt. At the time, the White House said the sessions were not seances.

Abraham Lincoln's wife, Mary Todd Lincoln, was rumored to have held seances at the White House in order to contact her two dead sons, Eddie and Willie. She also reportedly went to seances under an assumed name after the president's death to attempt to contact him.

Immediately after the seance remark, Obama said he had "re-read some of Lincoln's writings, who's always an extraordinary inspiration" and mentioned that former Presidents Jimmy Carter and George H.W. Bush and current President George W. Bush "have all been very gracious and offered to provide any help that they can in this transition process."