(CNN) -- As Sen. John McCain bowed out of the historic presidential election Tuesday night, he urged his supporters to bridge their differences with Sen. Barack Obama and unite for the good of the country. 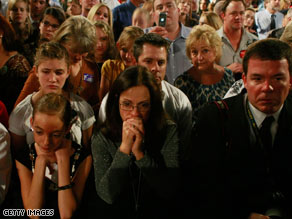 Supporters of John McCain react as their candidate concedes in Phoenix, Arizona.

"Sen. Obama and I have had and argued our differences, and he has prevailed. No doubt many of those differences remain. These are difficult times for our country. And I pledge to him tonight to do all in my power to help him lead us through the many challenges we face," he said.

Just the mention of the Democrat's name elicited boos from the sea of teary-eyed McCain supporters at the Arizona Biltmore in Phoenix, Arizona.

Members of the dejected crowd shouted "no way!" when McCain promised to work with Obama.

As McCain graciously acknowledged defeat, it was clear that not all of his supporters were ready to rally behind the president-elect.

Kevin Neugebauer of Katy, Texas, said he was "really disappointed " and "distraught" about his party's loss.

"Being a conservative, I think the Republican Party's kind of lost some of their identity of who they are. I really don't understand how it could happen," he said. "I don't know if it's really sunk in. It's hard to understand."

Other McCain voters took their frustrations to the Internet, finding solidarity on anti-Obama sites.

"We have to watch this guy and not give him an inch," one McCain supporter wrote. "The same way he criticized every move of President Bush. We have to make things as difficult for him as he did for Bush."

See what CNN analysts had to say about the Obama win »

"The new mantra for all of us," another supporter declared.

Some voters wrote that they cried through the night, declaring Tuesday a "sad day" for the country, while others encouraged Republicans to "hold your heads up high."

McCain's concession was reminiscent of Sen. Hillary Clinton's call for unity when she abandoned her campaign last June and urged her 18 million voters to rally behind Obama.

See what Clinton and others had to say about the win »

The New York senator's endorsement was met with a scattering of boos and thumbs-downs from the crowd, and some ardent Clinton backers vowed to never embrace Obama.

Even as Clinton campaigned hard for Obama, there were questions about whether her voters would follow suit.

In the final weeks of campaigning, McCain and Alaska Gov. Sarah Palin saw a similar degree of passion at their events, and with that passion came rage from some supporters.

Some McCain voters called Obama a "terrorist," and others said they were afraid of an Obama presidency. McCain was booed when he urged everyone to be respectful and not fear Obama.

Obama won the presidency with the support of 63 million voters, but he must now win the confidence of the other 56 million who thought McCain was the better candidate.

Obama reached out to those voters in his victory speech Tuesday night, telling them, "I may not have won your vote tonight, but I hear your voices. I need your help. And I will be your president, too."

As Obama transitions into power, Democratic strategist Donna Brazile says, he should ask McCain to help set a new tone in the country.

"A tone that would allow the American people to come together. The one mistake that we continue to make is that we label people. We say you're conservatives, liberal, progressive, right wing, left wing. I think people just want to spend one day being Americans. They want to come together around a common purpose, common values," she said.

"I think this is a wonderful moment, not just to re-brand one party or to give another party a mandate, but to give the American people a future that they deserve."

All About Republican Party • John McCain