(CNN) -- Sen. Barack Obama told CNN on Friday that turning around the economy and energy independence are his priorities for 2009 if he is elected president. 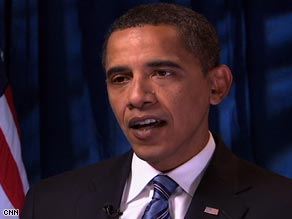 In an interview with Wolf Blitzer in Des Moines, Iowa, Obama was asked to name his top priority from a list of issues, including taxes, health care, education, energy policy and immigration.

"[The] top priority may not be any of those five. It may be continuing to stabilize the financial system. We don't know yet what's going to happen in January," he said. "None of this can be accomplished if we continue to see a potential meltdown in the banking system and financial system. So that's priority No. 1: making sure the plumbing works."

"We have to seize this moment, because it's not just an energy independence issue; it's also a national security issue, and it's a jobs issue. We can create 5 million new green energy jobs."

Priority No. 4: "Making sure we have tax cuts for the middle class as part of a broader tax reform effort."

Obama later expanded his discussion on how tax cuts relate to a bigger economic plan.

"The tax cut that I talked about may be part of my priority No. 1, because I think that's going to be part of stabilizing the economy as a whole," he said.

"I think we're going to need a second stimulus. Part of my commitment is to make sure that the stimulus includes a tax cut for 95 percent of working Americans. It may be the first bill I introduce."

Watch Obama talk about the details of his tax plan »

Priority No. 5: Reforming the education system.

Separately, Obama was asked about his pledge to have a bipartisan administration, and whether it included room for his opponent.

"Well, I will tell you what," Obama said. "I would certainly consider any position for John McCain where I thought he was going to be the best person for our country."

He also blasted McCain for not catching Osama bin Laden.

McCain has said in a presidential debate that he knows how to capture bin Laden but has failed to explain how he may accomplish that task.

It's something that's not lost on Obama.

"Clearly, Sen. McCain doesn't know how to capture bin Laden, because he was supportive of a huge strategic blunder when it came to accomplishing the task," he said. "I will focus on what [Defense Secretary Robert] Gates and others have indicated as our No. 1 security threat, and that is bin Laden and Al Qaeda."

Obama also discussed a possible strategy for stabilizing the war-torn country of Afghanistan -- and the resurgence of the Taliban and al Qaeda in nearby Pakistan.

"[Pakistan] are a fledging Democratic government. ... We have to support their efforts to democratize. That means ... not just providing military aid. It means also helping them to provide concrete solutions to the poverty and lack of education that exists," he said.

Obama has said that he would address Pakistan policy to secure the border and crack down on terrorist camps.

"We must make it clear that if Pakistan cannot or will not act, we will take out high-level terrorist targets like [Osama] bin Laden if we have them in our sights," he has said.

The Illinois senator also proposes to cut down on narcotics trafficking by offering alternative livelihoods to poppy farmers.

On Afghanistan, Obama has said in the past that he would send at least two additional combat brigades to Afghanistan and would seek greater contributions -- with fewer restrictions -- from NATO allies.

Obama would focus on training Afghan security forces and supporting an Afghan judiciary, with more resources and incentives for American officers who perform these missions. He also proposed an additional $1 billion in nonmilitary assistance each year, with meaningful safeguards to prevent corruption and to make sure investments are made, not just in Kabul but also in Afghanistan's provinces.

McCain, meanwhile, would send three additional brigades to Afghanistan and double the size of the Afghan army to 160,000 troops.

He also proposes to pay for the Afghan troop increase through an international trust fund financed by the United States and its allies, and would apply the counter-insurgency technique being employed in Iraq to the Afghanistan conflict.

McCain has said he would appoint an "Afghanistan czar" based in the White House who would report directly to the president.

On the Afghanistan/Pakistan border issue, McCain said he would crack down on narcotics trafficking in the country and would focus on strengthening local tribes on the border between Pakistan and Afghanistan to fight terrorism there.