(CNN) -- Sen. Barack Obama said Sunday that Sen. John McCain was now "owning up to the fact that he and George Bush actually have a whole lot in common." 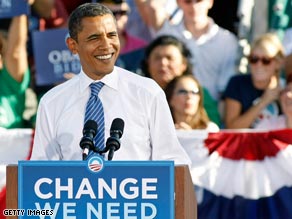 Sen. Barack Obama has an 8-point lead, according to CNN's average of national polls.

"Just this morning, Sen. McCain said that, actually, he and President Bush -- 'share a common philosophy.' That's right, Colorado. I guess that was John McCain finally giving us a little straight talk," Obama said at a rally in Denver, Colorado.

Obama was referring to McCain's Sunday interview on NBC's "Meet the Press."

NBC's Tom Brokaw pointed to a review of McCain's record, which showed he voted with Bush 92 percent of the time.

"So it's a little hard for the public to separate you from this administration, isn't it? " Brokaw said.

McCain said there were times he has broken with the Bush administration, but added: "So do we share a common philosophy of the Republican Party? Of course."

"But I've stood up against my party, not just President Bush, but others; and I've got the scars to prove it," he said. "Do I respect President Bush? Of course I respect him. But I pointed out we were on the wrong track in a whole lot of ways."

Obama said Sunday that as the campaigns wind down, voters can expect "the same kind of politics that we've seen over the last eight years" from McCain. "It's a politics that is more about tearing your opponent down than lifting your country up."

At a rally in Cedar Rapids, Iowa, McCain shot down the notion Obama's charge that he is "more of the same" and vowed to bring change to Washington.

Despite his sagging poll numbers, McCain said earlier Sunday that he is "very happy with where we are" and very proud of his campaign.

"We're doing fine," the Arizona senator told NBC. "We are very competitive in many of the battleground states."

McCain brushed off polls that show him trailing Obama, saying those numbers are "all over the map."

"Those polls have consistently shown me much further behind than we actually are. It all depends on the voter turnout ... we're doing fine. We have closed in the last week." he said. State-by-state polling

According to that poll, 46 percent of respondents have a favorable opinion of Palin, compared with 59 percent at the time of the Republican National Convention. The poll shows an increase in the number of people who have an unfavorable view of her -- 51 percent compared with 29 percent in early September.

The poll, conducted October 20-23, has a sampling error of plus or minus 2.5 percentage points.

"I don't defend her. I praise her," McCain said. "She has more executive experience than Sen. [Joe] Biden and Sen. Obama together."

McCain acknowledged he and Palin disagree on some issues, but said it was "because we are both mavericks."

"But we share the same goal of cleaning up Washington. We will clean up and reform Washington together, and she has the credentials, and the vision, and the dynamism and the strength to do that," he said.

Sources told CNN that long-brewing tensions between Palin and key McCain aides have been intensifying.

Several McCain advisers suggested to CNN that they have become increasingly frustrated with what one aide described as Palin "going rogue."

With just nine days left to campaign, the candidates and their running mates are focusing their attention on the battleground states as they try to turn out the vote and woo those who are still undecided.

McCain on Sunday was campaigning in Iowa, where Palin campaigned the day before. The latest polls show McCain trailing by double digits there.

Palin on Sunday had events scheduled in Florida and North Carolina. CNN's latest polls show a tight race in both states.

Biden was in his home state of Delaware on Sunday with no public events scheduled.