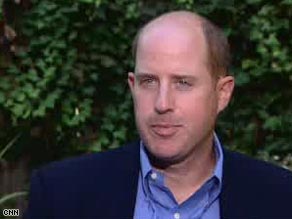 "I had a responsibility to my family," says Allen Raymond about his decision cooperate with investigators.

The former Republican political operative went to federal prison after he pleaded guilty to charges of phone harassment. He jammed the phone lines of New Hampshire's Democratic Party on Election Day six years ago.

"The concept was to disrupt lines of communication. That's a fancy way of saying, 'make it so the phones didn't work,' " Raymond said recently. "No calls going out. No calls going in."

We're not going to give away exactly how Raymond did it. According to federal prosecutors, two top Republican Party officials tapped Raymond's Virginia-based telemarketing firm for the operation. Raymond then contracted out the job to a private phone bank in Idaho.

"At first, people had various impressions about what was going on," Sullivan recalled. "For example, at the Manchester field office, the young man who opened the office thought, 'The phones are all ringing off the hook. Nobody's here. I've broken the phone system. What did I do wrong?' And he was on the verge of tears."

Raymond details how he jammed the system »

The operation also jammed the lines inside a firefighter's union hall in Manchester, New Hampshire, where Jeff Duval and other local firefighters were lining up car rides to help senior citizens get to the polls.

"It almost felt to me like an election might have been stolen," Duval said. "I know for a fact that we received calls a few days later from people saying 'we tried to call you.' And I say 'did you get out and vote?' And they said 'no.' " iReport.com: Are you voting early? Share your story

Looking back, Raymond said, he thinks the scheme was ingenious in an "evil genius sort of way."

In his book, "How to Rig an Election: Confessions of a Republican Operative," Raymond details how he got caught. An hour and a half into the jamming operation he received an e-mail from a Republican official, frantically telling him to shut down the calls. The e-mail read: "Chairman wishes not to proceed with this project ... insists it violates federal law."

Raymond decided to come clean about his role in the operation and cooperate with investigators.

"I felt like I had an obligation, and not obligation to my country or obligation to the people in New Hampshire, nothing like that," Raymond said. "I had a responsibility to my family."

One of Raymond's alleged co-conspirators, James Tobin, was a top official with the National Republican Senatorial Committee that year. He went on to serve as George W. Bush's Northeastern regional re-election chairman in 2004. Tobin was initially convicted. But he succeeded in having that decision overturned by an appellate court. Just last week, Tobin was again indicted in the case on two counts of making false statements to a federal agent. His lawyer had no comment.

Another co-conspirator and former chairman of New Hampshire's Republican Party, Charles McGee, pleaded guilty to phone harassment in the case and served seven months in prison.

Democrats insist that the phone jamming operation in New Hampshire had national implications. The balance of power in the U.S. Senate was on the line that year and the Senate race between Democrat Jeanne Shaheen and Republican John Sununu was decided by just 19,000. Sununu won.

Some state Democrats remain convinced that the phone jamming operation resulted in some votes lost.

"I think they were willing to do whatever it took to win, even if that meant breaking the law," Sullivan said.

Conservative author and Wall Street Journal columnist John Fund points out that there are dirty tricksters in both parties.

"No party has a monopoly on virtue," Fund said.

Fund has also written a book about the problem, "Stealing Elections: How Voter Fraud Threatens our Democracy." His book focuses on the allegations facing more liberal groups like ACORN.

Officials at the polls are unprepared for what could be a record turnout on Election Day, according to Fund.

"We need a lot more poll workers this time to handle the enormous crush of new voters," Fund said. "We need more poll watchers and monitors, on both sides, to make sure each side is watching the other."

Allen Raymond learned that winning elections at all costs can come at a heavy price.

"I'm a felon," Raymond said. "I think about it everyday. Every day, everything that I do every day, I try to do in such a way that makes up for that mistake."

Raymond doesn't plan to stop talking about his trip to the political dark side. He said a major Hollywood studio plans to begin production on a film version of his cautionary tale.